"There would be no Ozomatli or Jurassic 5 without Bambaataa."

When DJ Shadow and Cut Chemist arrive in Pittsburgh on Nov. 14 for their show at Mr. Small's, they will bring with them more than 30 years of turntable experience. Their set, however will reach back even further, and illuminate the very roots of hip hop. With 500 of Afrika Bambaataa's records in tow, Shadow and Cut will pay homage to one of hip hop's most influential icons.

Both Cut Chemist (Lucas MacFadden) and DJ Shadow (Joshua Davis) have spent the past three decades establishing themselves as, arguably, hip hop's most stalwart turntabalists. Cut Chemist's early projects with Ozomatli and Jurassic 5 solidified him as one of the most creative in the business, and DJ Shadow's debut studio album, Endtroducing, was included in Time magazine's "All Time" 100 best albums. The two have worked together on numerous projects in the past, including 1999's Brain Freeze, which originally attracted archivist Johan Kugelberg. It was Kugelberg who brokered a deal between Bambaataa and Cornell University, resulting in a majority of Bambaataa's collection to be archived there; he then approached Shadow and Cut with an idea to create a set based on Bambaataa's records. 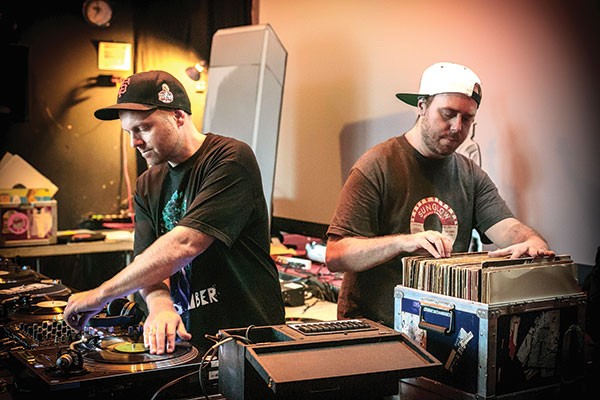 "We said yes," MacFadden recalls with a chuckle, "as long as we got to tour with it. Because we really wanted to do it right. [After all,] there would be no Ozomatli or Jurassic 5 without Bambaataa. " With Bambaataa's blessing, Cut and Shadow spent two-and-a-half weeks digging through a sampling of his 42,000 vinyl records, finally narrowing their search to 500, which they've taken on the road as the Renegades of Rhythm tour.

The story of Afrika Bambaataa is multifaceted. Born as Kevin Donovan in 1957, he grew up in the Bronx with a mother who was entrenched in the civil-rights movement. In the '70s, Bambaataa was a well-respected and upwardly mobile member of one of New York's most ruthless street gangs, the Black Spades. After a trip to Africa, however, his worldview changed, and he began to see music as a way to elevate exploited blacks. Upon his return to New York, Donovan changed his name to Afrika Bambaataa (Zulu for "affectionate leader") and founded the Universal Zulu Nation, whose purpose was to unite rival street gangs and to promote peace and social welfare.

The social element of Bambaataa's legacy was not lost on Cut and Shadow, and they were both adamant about including that part of his story into their set — and, according to Davis, those witnessing the live set understand that it's not just the aural element that the two DJs are projecting.

"I think what the crowds are realizing is that there was a lot of thought put into this, a lot of dreaming put into it," Davis says. "I've always considered Bambaataa a dreamer. He's somebody that was in a situation being in the Bronx in the '70s, which is unlike most places that anyone has ever been to, and he always dreamt for a way out, not necessarily for himself, but for anyone that felt undue pain and harsh situations."

"What Bambaataa taught us," adds MacFadden, "still holds a lot of weight in how we carry our lives."

Music became the primary means by which to implement Bambaataa's Zulu Nation's agenda, and soon Afrika Bambaataa's work stretched beyond the streets of the Bronx and began to invigorate the fledgling hip-hop genre. He was one of the first to use the Rowland 808 drum machine, revolutionary for its time, and was also one of the first DJs to make his reputation based on the depth of his record collection. Now, as Bambaataa serves as a visiting scholar at Cornell University, his reputation is based on the depth of his knowledge. With so much culture and history vested in both the man and his collection, anyone would feel the weight of having to choose a slim minority to tell his story.

"We had to pull things that were relevant to the history of hip hop," MacFadden explains. "If we wanted to cover the variety of genres that he was playing, and weren't really familiar with what we saw, we just had to go on instinct and how the covers looked — if the cover was taped up and marked up, then, yeah, we're going to pull that."

It could be argued that all the roads of hip hop lead back to Afrika Bambaataa, be it breakdancing, graffiti, rap, EDM, trance or turntablism. And, with the Renegades of Rhythm tour receiving high accolades, it would seem that those roads pass through Cut Chemist and DJ Shadow as well. After all, it was the popularity of Cut and Shadow in the early '90s that brought about a renewed interest in Bambaataa's early work. But although their careers drove younger listeners to hip hop's pedigree, they're reluctant to accept such an honor.

"I don't consider myself a factor in that movement at all," admits Davis. "I think I was just a fan and a bystander and a proponent of what was happening."

Regardless of who might be responsible for upholding the genre, the point for Cut and Shadow is to maintain the legacy of Afrika Bambaataa, not only by playing his records but also by maintaining his philosophy.