"If you're a one-directional DJ, this isn't your type of battle." 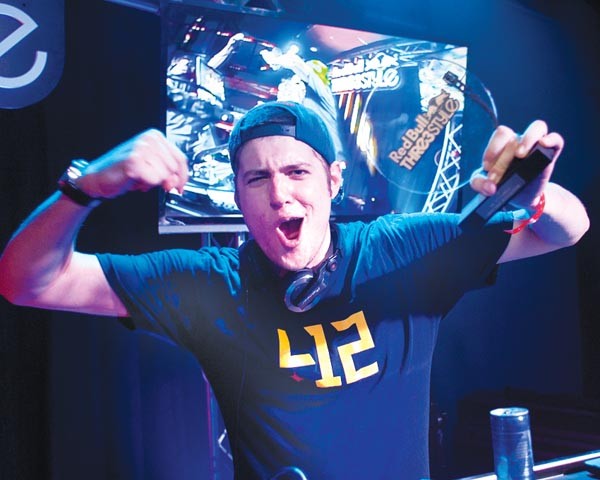 "If you're a one-directional DJ, this isn't your type of battle," Petey C says of Thre3Style. "They're looking for the guy that can rock the party, got some skills with the tricks, but the songs make sense. Yet, someone that has stage presence and can keep the crowd involved." The name "Thre3Style" stems from the challenge to use at least three different genres of music in the performance.

At the Pittsburgh event, Petey C engaged the crowd from the beginning, using a sample from Public Enemy that demanded, "At the count of three, I want y'all to tell me the name of my DJ," to which the large audience responded "Petey C!" He also incorporated the popular tricks of '90s-era hip-hop DJs, such as behind-the-back and under-the-leg cutting and scratching of records.

"I've seen old-school guys like Roc Raida do crazy body tricks," he says. "We grew up watching that, thinking that was amazing. And then one day you realize you can do it — it's kinda cool."

DJ Petey C has worked as a resident DJ at local clubs such as Jimmy D's in the South Side and Exit in the Strip District, but his earliest party-rocking experience came in college.

"I went to Slippery Rock for a semester right after I graduated high school," he explains. "People were having these college parties and frat parties, and the music was horrible. Dudes would just put on ‘Sweet Caroline,' like, 15 times on repeat. I just couldn't take it anymore, so I finally offered to do it one day."

On Feb. 7, DJ Petey C will compete in Philadelphia against the four winning DJs from New York City, Boston, Philadelphia and Washington, D.C., in the East Coast qualifier. By then, the 130 national contestants will have been whittled down to 25; the winners of the five regional quarterfinals will advance to a national championship event. The national champion will then advance to the world finals in Toronto in December.