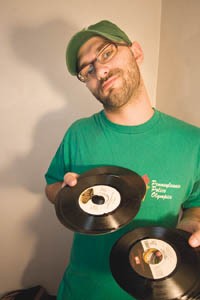 While the roots of reggae run deep and its influences are many, change is a constant in the genre. Even in Pittsburgh, reggae has had its peaks and valleys. Among the few here who make a living with reggae music, DJ Dan Dabber has stayed consistent through those changes. Yet now he's starting over again: Two of his successful reggae nights have been relocated due to venue closings. Meanwhile, Dabber's musical selections reflect his life: from feeling alienated by the materialism of contemporary hip hop to embracing the spiritual and cultural message of roots reggae.

Dan "Dabber" Snyder, who's 26, moved here to study creative-nonfiction writing at Pitt. His musical and personal roots lie in his hometown of Avonmore, near the Kiskiminetas River. "I went to Kiski Prep ... and met people from all over the world," says Dabber, "but I was the only dude listenin' to hip hop from my town."

While steadily working on his bachelor's degree, Dabber picked up a WPTS radio show -- and a feeling of alienation from hip hop. "I felt betrayed by hip hop 'cause everybody was rappin' about parties I couldn't afford to get into," says Dabber. "And around that time I was goin' through a lot of personal trials, and the spiritually uplifting vibe of roots reggae helped me through that and made me wanna share it with others."

"Roots reggae" describes a style that began taking off on the world stage in the early '70s; by the time it hit the pop charts with Bob Marley, numerous Jamaican studios and producers were regularly adding to the genre's already enormous discography. The cornerstone of that legacy was Studio One, known as the Motown of Jamaica. Founded by Coxsone Dodd in the late '50s, Studio One gave birth to legends such as Marley and the Wailers, Lee Perry, Burning Spear and Dennis Brown.

By immersing himself in roots reggae, Dabber was also retracing the roots of the hip hop he'd turned away from. Even as Marley brought reggae to American audiences, producers in Jamaica were developing a new sound. Focusing on DJs and their "sound systems" (entourages of emcees and humongous modified PA systems) and incorporating newly invented synthesizers, Jamaican producers created the reggae genre known as "dancehall." Early dancehall became the main influence on hip-hop pioneer DJ Kool Herc, who traveled around the Bronx in the early '70s with his sound system and a group of emcees who hosted and rapped in between DJ sets, and who laid the groundwork for the format of rap music.

Dabber explored these sounds and styles, playing his new-found favorites on his WPTS show. In 2001, he was invited to host a regular DJ night at Oakland's Pub I.G., owned by the India Garden restaurant. With help from his roommate DJ Bonics, Dan teamed up with new friends Tommy Hemp and DJ Stain Steel to form The Reggae Bus Crew. Along with the Crew members' solo endeavors, the group's three-year stint at I.G. helped each develop as a DJ while adding a fresh event to the fluctuating local reggae scene.

In 2003, Dabber moved to Eugene, Ore., to give Pittsburgh a break and refresh his perspective. With some contacts from local DJ and close friend DJ Vanilla Fingers, he linked up with the Iron Fist sound system. "There were so many sound systems in Eugene that I had a lot to compare myself to and learn from," Dabber says. "I'm always tryin' to learn new tunes and rhythms. I listen to DJs all over the world, like David Rodigan and Tony Matterhorn, to help me constantly improve."

Dabber's most successful solo venture was Nice Up! Fridays at the Pittsburgh Deli Co. Hosted by Dabber and Kate "Queen of the 412" Gittings, the event's 18-month run included special guests every week and showcased the city's most active reggae DJs.

Both Pub I.G. and Pittsburgh Deli Co. have closed, but Dan Dabber, back in the 'Burgh from Oregon, is at it again with three new weekly nights, each featuring a different style of reggae. Well Rooted, at Logan's Pub, in Oakland, is roots reggae; Bloomfield of Dreams, at the Pleasure Bar, highlights dancehall; and a new Nice Up! Fridays at Hkan features roots and dancehall.