Just as disco culture's death knells were looped and warped into techno's groundbreaking bleep and house music's ubiquitous thud, the signature sounds of mid-'90s U.S. raves and jungle parties have now subsided in favor of music as broad in scope and experimentalism as in dance-floor appeal.

Case in point: Geoff Maddock, a.k.a. DJ Cutups. A veteran of those heady raves of yore and a staunch survivor of late-'90s drum 'n' bass formalism, he's now one of Pittsburgh's foremost proponents of the music's hybrid descendents.

Since its inception at the end of the millennium, Cutups has made a weekly home at FUZZ, the Wednesday night drum 'n' bass meltdown at the Bloomfield Bridge Tavern. And at Brillobox he joins like-minded dance-music graduate Ed Um and renegade interior decorator Thommy Conroy, transforming the room into a hedonistic confession-fest for their monthly Shame On ... parties. On the side, Cutups operates one of America's leading distributors of seriously underground dance music, Wrecked Distro, and works with DJ Keebs on Stackin' Paper, a new party series showcasing electronic dance music's more cutting-edge sides.

Not bad for a guy whose initial feelings on DJing were lukewarm at best.

"I came at DJing being skeptical of it -- of DJ culture [in general]," says Cutups. "I was more into experimental music, and layering sounds like ambient music -- using records to make sounds. But this was around 1995, and I was also into dance music. Pittsburgh had a [drum 'n' bass] scene before a lot of places in the U.S., and when that really started blowing up, it got me more interested."

"At that point, I was playing the most far-out stuff I could, without worrying about what any other people thought," says Cutups. "Hardcore, breakcore, ambient music -- stuff that still, today, isn't exactly 'club' music, but is at least a little more accepted than it was then."

While other Pittsburgh drum 'n' bass scene DJs found nationwide fame -- such as Sine and Dieselboy -- it eluded Cutups. Not that he minded. Instead, he reveled in a place at the top of the tiny heap of DJs specializing in drum 'n' bass music's more extreme fringes such as breakcore. At one point, he plied his drastic beats upon audiences numbering in the thousands at raves such as 1998's Submerge II, in Cleveland.

But such events, and their attendant stereotypes, never defined Cutups, nor the majority of his friends in the electronic dance-music world. Rather than the social epoch of rave culture, it was the music's mercurial nature that kept their attention -- and still does today.

"As a teen-ager, [drum 'n' bass] was the first music I experienced where, every single week, there was a new sound," says Cutups. "It was kind of addictive -- even if you don't like something, you'd think, 'The last thing wasn't that great, but maybe the next one will be.'"

Between his regular events and occasional one-offs (like the dubstep room at the upcoming FUZZMANAUT party), Cutups finds himself able to continue that manic music fandom, sifting through drum 'n' bass' descendents as well as the slew of danceable electronics that have followed those, from poppy electro to hardcore hip-hop mash-ups. His list of recent turntable favorites includes everything from hands-in-the-air, sing-along party anthems to hard-hitting, stripped-down dub pounders.

He's not alone in such 21st-century diversification. By his own estimates, the core of the drum 'n' bass scene's supporters have followed that addiction for new, experimental dance sounds and branched off in many directions. But they all still share a desperate need for the low end of the sonic spectrum.

"The whole concept of all this music comes down to bass," he says. "It comes down to, 'I want to hear some really crazy sounds on a very loud system.' Take FUZZ -- we could sit around and listen to that music at home, but no one's got those giant bass cabinets. Drum 'n' bass, as its own thing, is dying out. But the people who were really into it, a lot of them are much broader now in their musical interests -- the people are the same, and they maintain that interest." 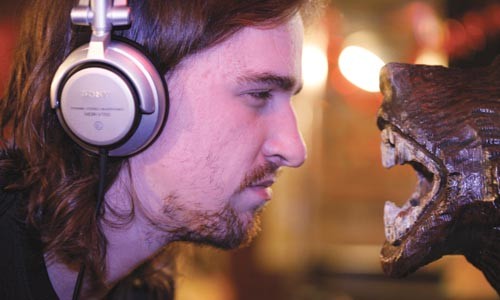