DJ Chief Xcel of Blackalicious talks about the new record, his partnership with Gift of Gab, and record shopping in Pittsburgh

“A lot of the stuff I used on Blazing Arrow I found at Jerry’s.”

Blackalicious is reliable. That much is clear from the first couple of songs on Imani Vol. 1, the new album from the veteran hip-hop duo and their first since 2005. DJ Chief Xcel’s beats are as meticulously layered, soulful and satisfying as they’ve ever been, and Gift of Gab’s unmatched talent for speed, honesty and clarity in his lyricism has only gotten stronger. Spend a few minutes with the single “The Blow Up” to learn this firsthand.

Over its 20-plus year career, Blackalicious has consistently produced progressive, challenging hip hop. It’s old-school stuff, rooted in pre-digital DJ culture, but somehow the relevance doesn’t waver (even Daniel Radcliffe is a fan, as he proved on The Tonight Show with Jimmy Fallon). Like the duo’s first three records, Imani Vol. 1 is futuristic and retro, political and personal, and really, really fun to listen to.

But Imani also marks new territory for Blackalicious. The album, due out Sept. 18, is a self-released, crowd-funded affair to be spread over three volumes and released over the next few years. City Paper spoke with DJ Chief Xcel on the phone from South Carolina during a day off to ask what’s changed, what’s new, and the crate-digger’s prerequisite Jerry’s Records question. 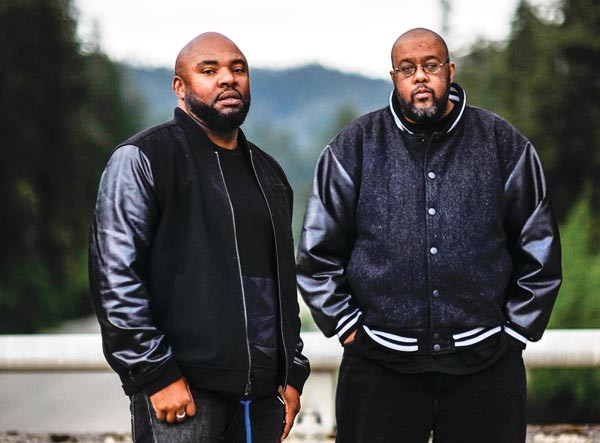 Photo courtesy of B+
Blackalicious: DJ Chief Xcel (left) and Gift of Gab

Imani Vol. 1 is your first album to be self-released and funded through a PledgeMusic crowd-funding campaign. Why the change?

With the Pledge thing, we really wanted to be able to give something special to the fans who’ve supported us through all this time. You get everything digitally at the drop of a dime, but those physical things that you can get, those things that are personalized by us, those things are really, really special. You know? And me being a record collector, I’m always looking for things that are sought after. So it became an opportunity to do that.

What was it about this project that inspired you guys to release it in three volumes?

We had amassed so much material. It’s very difficult to tell the whole story without certain songs, certain songs are key. We needed a bigger soundscape to express what we wanted to express. We didn’t wanna make it a triple CD or just a release with 48 songs, ya know?

I’ve never been the type to really put a definition on things. One of the things that I enjoy and that’s intriguing to me as a producer is seeing what the listener’s definition is [of] our art, what they walked away [from] it with, what their interpretation of it is, so I never really make a point to say, “This record is this.” You know what I mean? I want it to touch you how it touches you.

As a prolific record collector and sampler, is there any genre of music that you completely dislike?

Do you ever check out Jerry’s Records when you’re in Pittsburgh?

Oh, yeah! When I recorded Blazing Arrow, that summer I was living in New York because me and [recording engineer] Russell Elevado were mixing at Electric Lady[land Studios] and I was also going back and forth to Philly to work with ?uestlove, but that was during the week. On the weekends, I would drive from New York to Pittsburgh to go to Jerry’s and then I’d spend my whole weekend there, then I’d drive back to New York on Monday. That was through that whole Blazing Arrow period.

Yeah man, a lot of the stuff I used on Blazing Arrow I found at Jerry’s. There was like a Pittsburgh Pirates record that we cut, I think we used part of it on “Passion.” I came up with a lot of stuff at Jerry’s, Jerry’s is dope. Then after that, we hit it a few times when I was on the road with Public Enemy and Dilated [Peoples]. Me, Evidence and [DJ] Babu would roll through there and hit it up, too.

Over your 20-plus year career as Blackalicious, has your partnership with Gift of Gab changed?

Creatively, it’s just a lot more efficient. We’re old men, you know? So when it’s time to get in and work, we get in and work. But that’s also the reason why we can go in and amass so many songs so quickly when we do sit down and work together. Because there’s not a lot of time spent teetering around the edges, you know what I mean? We just dive right in.