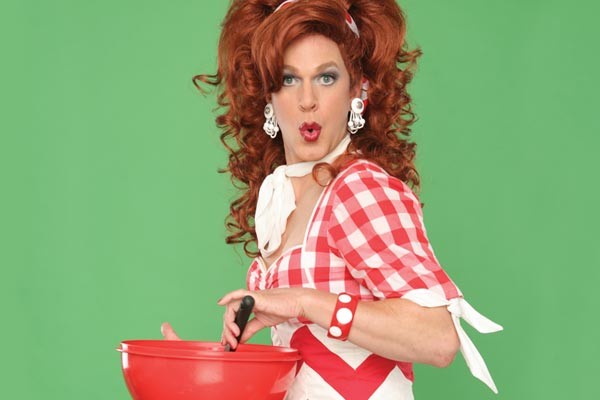 "Could we move you to Table 24?" asked the anxious man in the blazer. "Don't worry: You'll be safe."

I obliged and moved to Table 24, which was in the front row and dead center at the Cabaret at Theatre Square. So either the man was an idiot, or he lied to my face, because there was nothing "safe" about Table 24. At Dixie's Tupperware Party, Table 24 was the middle of the action. Thanks to nonstop audience participation, sitting at Table 24 made me a recurring player. And although I have a policy, as a theater critic, to divorce myself from any action onstage, I had no choice. At last Thursday's 1 p.m. matinee, the show became Dixie and Robert Isenberg's Tupperware Jubilee.

Dixie is a big-haired, foulmouthed Southern girl with a trailer-park past and a heart of gold. She sells Tupperware products, and although the scattered catalogues and order forms may seem like props, the show is, in fact, a real-life Tupperware party. Dixie unveils actual products, and you can actually order them.

But "Dixie" is the alternate persona of actor Kris Andersson, who is credited as playwright. Dixie's Tupperware Party has no plot, and it can barely be categorized as a "play," but it's a goofy little salad of standup, drag show, improv exercise and sales pitch. Andersson debuted the solo show at the New York International Fringe Festival, and the Civic Light Opera brought Dixie to Pittsburgh for a month-long run.

Patron beware: If you don't want to join Dixie onstage, or open her wine bottle, or demonstrate a can-opener in front of several hundred strangers, Table 24 is not remotely "safe." But in the end, one woman asked, "Robert, are you a plant?" So I guess Dixie and I did pretty well.