Don't let the name mislead you — although really, how could it? What are the odds that a bar named "Dive" actually is one? Dive Bar and Grille, on Butler Street near 51st, doesn't beat those odds, but it does repeat a dining concept that originated in decidedly dive-averse Wexford in an appealing and, to us, far more accessible context.

Dive does not appear to trade on the hipster obsession with old-school authenticity as much as the selection of a simple yet evocative (and vaguely on-point) name. As such, Dive knows you seek an unpretentious atmosphere and a tasty meal, but you don't really want cheap domestic beer, pickled eggs and off-brand chips for dinner.

While we were thankful for that, we were more than a little overwhelmed by the epic listing of dining options that were on offer. The menu is a veritable run-on sentence of ideas — some of them great, some of them kooky, not one of them boring — for re-imagined, re-conceived and re-structured pub grub. It features sections, some of them as long as entire menus at other restaurants, dedicated to its own interpretations of sliders, quesadillas, sandwiches, wraps, burgers, specialty burgers, entrees and, last but not least, "I Hate Vegetables." That last is structured around bowls of fries or housemade chips and an array of 30 toppings and 18 sauces ranging from turkey to jalapeño and mac-and-cheese to pesto aioli, from which you can pick and choose to create custom poutine- or nacho-like ensembles. 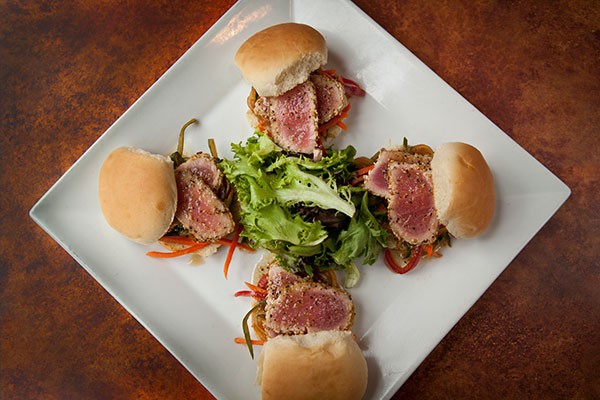 It may be going too far to say that these bowls are a microcosm of the menu, but the blend of classic bar-food standards with upscale ingredients and trendy touchstones like fresh mozzarella and (inevitably) a fried egg on top was evident in the creatively conceived, sometimes witty, occasionally over-the-top approach to pretty much everything at Dive. The remaining question, aside from how we'd manage to narrow our options, was whether the kitchen could manage so many preparations.

Our "I Hate Vegetables" bowl, selected by our non-veggie-loving eldest offspring, made a winning first impression. The fries were deep brown and crisp but pliable enough to play well with toppings. Barbecued pulled pork was meaty and juicy, with just a hint of sauce. And while it was odd to see two slices of provolone just floating, raft-like, on top (the dish was not run under a broiler to melt them), there was enough residual heat to soften the cheese and help it distribute through the dish.

Dive calls its decidedly non-traditional quesadillas "crazy-dillas," and Angelique did question Jason's sanity in ordering one styled after a reuben. However, the well-balanced components, especially the tender corned beef, made this deli-Mex hybrid a surprising success. While crusty rye may be one of the best parts of a real reuben, the griddle-crisped tortilla wasn't a bad alternative.

The kitchen's "this is so crazy it just might work" ethos was also evoked in the name of the Loco Moco, a seasoned burger patty served over a pancake-size potato croquette with shredded cheddar, bacon and a sunny-side up egg on top. This, too, was a superb recombination of classic components, the burger expertly cooked to order, the bacon salty and smoky, and, best of all, the potato croquette crispy on the outside and delectably light and creamy within.

Crab-cake sliders made an impressive presentation with four sandwiches served tops-off, the better to apply some of the greens piled in the middle of the platter. The cakes — a bit bready, but full of crab, not Old Bay, flavor — sat atop an Asian slaw that was bright and flavorful, marred only by too-robust shreds of carrot. Tabasco aioli was both creamy and subtly fiery. 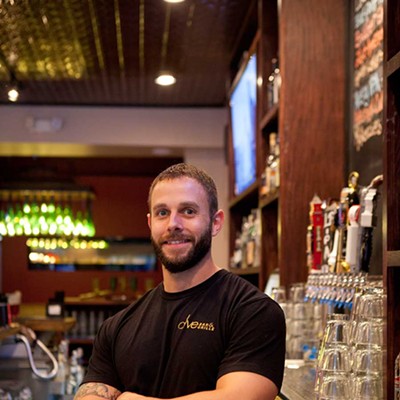 The fried-cod sandwich also looked fantastic, the portion modest but thick, the surface deeply browned and crinkly. But the batter was inexplicably bland, as if no salt whatsoever had been added. Sufficient sauce and slaw made the sandwich edible, but a good piece of battered cod should be tasty enough to stand alone, at least for a few bites.

Disappointing though this was, it didn't much dent our impression of Dive's kitchen as a sort of freewheeling laboratory for a "what if" approach to re-imagining classic bar fare. Sure, when you take some risks, there are going to be some flops, but on the whole, Dive demonstrated that it's got the chops to pull off most of its crazy, delicious ideas.