Local sports fans have sometimes hungered for winning teams, but they have rarely been starved for steakhouses. From dim, clubby dens hung with oil paintings and hunting trophies to bright and casual family-style dining rooms, steakhouses abound in and around Pittsburgh. So what, besides its name, distinguishes Ditka's, the restaurant enterprise of Mike Ditka, the Carnegie native, former Pitt tight-end and famed Chicago Bears coach?

Armed with hearty appetites and memories of Super Bowl XX, we decided to find out.

At first blush, retired sports heroes and steakhouses would seem to go together like framed football jerseys and fieldstone fireplaces. Or like Saturday Night Live jokes and expensive wine lists. But despite a Pittsburgh sports legends mural and a menu that does not shy away from "Da Bears" references, Ditka's is much, much more than a sports bar.

With its wood paneling, white tablecloths and $30 entrees, Ditka's aims for the serious steakhouse market -- but never forgets that it's in Western Pennsylvania, where playing, watching and talking about sports are life-sustaining activities on a par with eating, breathing and sleeping.

First in our line-up was pot-roast nachos, an unlikely riff on an appetizer so ubiquitous that it's a stretch to call it Mexican anymore. The substitution of pot roast for the standard ground or shredded beef takes this pub-grub standard even farther from its origins, into the territory of that recent trend which we might dub "nouveau comfort cuisine." All this aside, Ditka's marriage of Chicago-style pot roast with south-of-the-border tortillas and toppings was a success. A pile of crunchy chips was liberally draped with real melted cheese and plenty of jalapeños and diced tomatoes, which we found preferable to jarred salsa. Most importantly, and boding well for the rest of our meal, the beef itself was richly flavored, reminiscent of spicy Italian roast beef.

Many steakhouses have taken on sushi as a side line, so we tried a roll with tuna and avocado, tempura-battered and fried. The results were disappointing, with gummy rice, insufficient fish and avocado, and a crust that alternated between crispy and soggy.

"Mike's salad" featured field greens, pecans, cranberries, finely diced green apples and silken-textured goat cheese (apparently a substitution for the bleu cheese listed on the menu, but a fine one). It was all lightly dressed in balsamic vinaigrette, for a highly copacetic balance of flavors and textures. Though listed -- and priced -- as a side salad, the plate was large enough that the salad could easily have made a light dinner, especially when paired with soup or an appetizer.

Nevertheless, we pressed on to our entrees, with Angelique eager to try Ditka's rendition of skirt steak. This cut is usually reserved for fajitas, except in Chicago, where it is justly beloved as an entrée. Ditka's serves it marinated in chipotles and fresh lime, an assertive preparation which plays to skirt steak's strength as an extremely supple cut which is both highly permeable to other flavors and robustly flavored in itself. Angelique enjoyed every tender, beefy bite. Mashed Yukon Gold potatoes were an appropriately rustic accompaniment, with bits of skin still in the fluffy mix.

Testing Ditka's high-end chops, Jason ordered filet Oscar, crab meat atop a tall filet mignon set in a puddle of Béarnaise sauce. This dish can be tricky to get right, but Ditka's kitchen proved its mettle, creating a superb crust on the steak while keeping the inside pink. As in a dining companion's prime rib, the quality of the beef was unmistakable. The crab was more or less a crab cake, which proved an excellent variation as toasted breadcrumbs added another texture to this rich dish. The sauce was mild but creamy and herbal, and the bed of asparagus spears was bright green yet tender.

We also tried some a la carte side dishes. We loved the fresh creamed spinach, with an emphasis on fresh: The lightly wilted leaves were still flavorful in their creamy, cheesy sauce. Macaroni and cheese seemed as luscious, but the cheese lacked enough flavor -- perhaps because it was Wisconsin mild cheddar, rather than the New York sharp we prefer. A sweet-corn tamale cake, meanwhile, had plenty of corn flavor -- and despite its name, was not too sweet beneath a good spicy chipotle sauce.

Ditka's might rely on the football hook to get people in the door, but once they're inside, it rewards them with genuinely good food. Mike Ditka is having a winning season as a restaurateur. 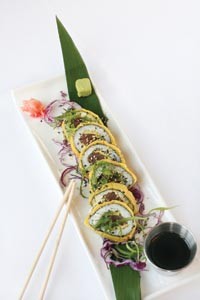