In restaurant years, 15 is a ripe old age. That's how long ago Dish opened on a back street on the South Side, tucked quietly away from East Carson Street's ever-more-raucous college-town vibe. At a time when the concept of fine dining in Pittsburgh still seemed stuck in the Nixon administration, Dish's owners, Michele and Cindy Savoia, transformed a former corner saloon into a restaurant whose sophistication, combined with a winning, welcoming lack of pretense, was unequaled by anyplace else in the city. Going to Dish was like entering a magical portal to somewhere distant, cosmopolitan and delicious.

These days, Dish's combination of exquisite food and serious cocktails is no longer unique, yet its star shines no less brightly. Not only is Dish still going strong, it has managed an extraordinary trick: It's remained successful by staying the same. While the Pittsburgh dining scene around it has completely transformed, Dish has remained a special place, true to its original vision, and almost outside of time.

Most of the credit goes to chef/owner Michele Savoia, whose simple Sicilian menu makes no compromises with American expectations. But we must reserve some props for the historic building, whose intimate, candlelit bar and dining room are perfectly proportioned for romantic dinners or rendezvous among friends, the music gradually shifting from jazz to electronica as the hour grows late.

Not that Dish is untouched by current trends. On our most recent visit, seafood sources were identified on the menu, and au courant menu darlings, like oven-roasted beets and julienned Brussels sprouts, were represented. But, integrated into traditional ensembles, they felt comfortable, not plugged into some trend formula.

So also with maccu, a hearty Sicilian soup made of dried fava beans, onions and fennel. Partial pureeing yielded a rustic texture; unlike brothy or creamy soups that slip down your throat, this one demanded a little actual chewing, which allowed its flavors to linger and bloom in the mouth. Salty shavings of ricotta salata and a drizzle of fruity, almost juicy olio verde enlivened the nuttiness of the beans.

The menu included antipasti both di terra and di mare, and the seafood options were extraordinary, including scallops dusted with wild Tuscan fennel pollen and crostini with sea-urchin roe. We chose grilled octopus. Three fat arms were curled around a pile of lightly dressed potato salad over greens. The octopus was perfectly cooked, smoky, tenderly meaty and faintly charred at the suckers for textural contrast. If the salad's fat capers and halved olives were perhaps too assertive for the balance of otherwise gentle flavors, their piquancy was on point.

The house salad was close to a perfect specimen, combining lettuces (crisp romaine, juicy arugula, faintly bitter radicchio and fully bitter frisée), crunchy (and pretty) watermelon radishes and sweet tomatoes. This was all dressed in a bright, white balsamic vinaigrette, while freshly cracked pepper played boldly among the other components. On paper, it seemed a salad like many others; on the plate — and the palate — it was exceptional.

A half-dozen pastas, a couple of meat dishes and a couple of seafood items comprised the entrees. Jason tried the veal rolled with smoked mozzarella, prosciutto and sage. The prosciutto crisped up like a paper-thin layer of bacon on a meatloaf, adding a distinctive texture, and the mildly smoky cheese complemented the meat flavors without hiding the autumnal, herbal notes of plentiful sage. Jason thought the veal, mild and tender yet not bland like chicken, was uniquely suited to the preparation, but we noted that it was replaced by pork loin in the following week's menu. 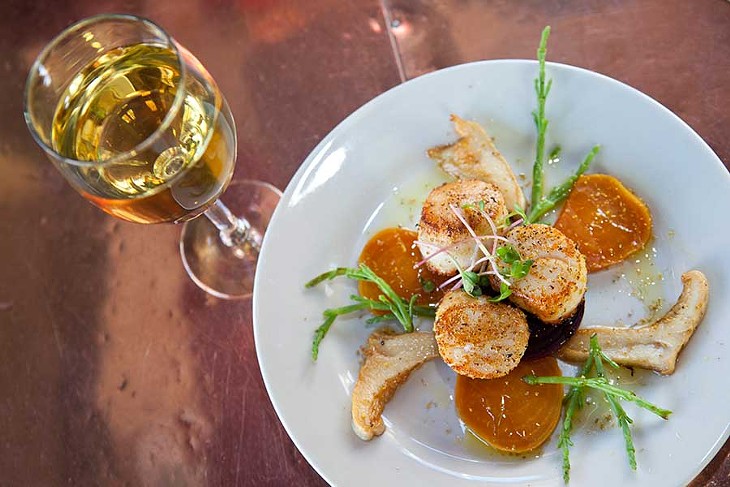 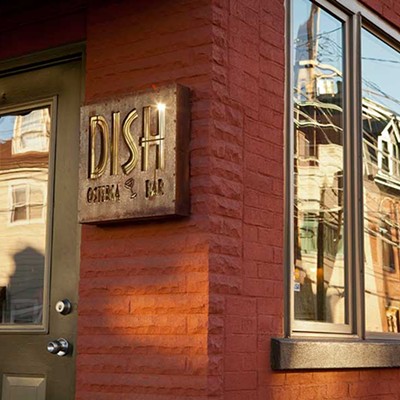 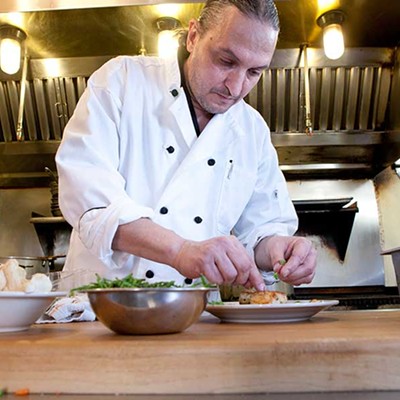 A side of potato-and-butternut-squash gnocchi were wonderfully light without being fluffy, chewy without being tough, and flavored with butter, more sage and Reggiano. The aforementioned julienned Brussels sprouts were sautéed for flavor, but would have benefitted from a bit more char.

Unable to resist the allure of housemade saffron semolina cavatelli, Angelique ordered it despite the sauce's containing mushrooms (not her favorite). Chopped fine, they contributed more woodsy flavor than texture to the dish, which predominantly featured savory chunks of sweet Italian sausage in their traditional medium, tomatoes. The flavors were well balanced and the sauce clung to the hearty pasta instead of drowning it.

Without pulling any stunts, Dish has remained relevant in our city's new, fast-paced dining scene by continuing to do what it has always done best: offering excellent, authentic, regional Italian fare in an alluring, intimate setting.