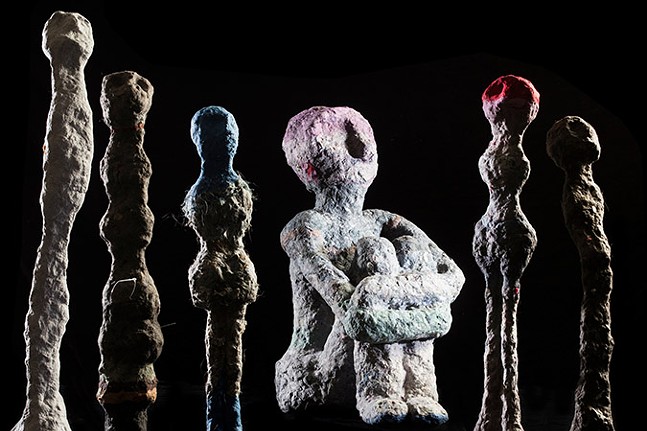 If you’re fortunate enough to have a washer and dryer in your home, you also have something else — a weird little bucket full of dryer lint. What does one do with the perfectly intact sheets of fabric bits, pet hair, and flecks of destroyed receipts? If you’re Pittsburgh artist and puppeteer Cheryl Capezzuti, you recycle it into art.

Now on view at be Galleries, Capezzuti once again shows off her talent for transforming trash with Discarded, a collection of dryer-lint soft sculptures that challenge viewers to “ponder daily debris, invite people into a collaborative experience, explore the role of art in contemporary life and find delight in the effort.” The show looks back on her National Lint Project, which originally ran from 2000 through 2004 and included everything from interactive exhibitions to live performances.

The be Galleries show consists of two different experiences. Patrons are welcomed by a front room filled mostly with giant puppets, parade masks, and marionettes made from objects salvaged during Capezzuti’s artist residency at the Pittsburgh International Airport. From there, they discover a second room dedicated to her variously sized and shaped lint creations.

Appropriately, an avian theme runs through many of the airport pieces. The puppets — some of which debuted during the recent First Night New Year’s Eve parade in Downtown Pittsburgh — hang suspended from the ceiling in all their colorful, garbage-y glory, their rain poncho or safety vest wings spread wide. The papier-mâché masks hang along the wall, resembling warped versions of the disapproving Muppet, Sam the Eagle, with their gaping beaks and big, cartoonish eyes.

The dryer lint works take a more featureless approach, many of them resembling figures molded by prehistoric hands, or, in some cases, the silent residents of Pompeii, preserved forever by the eruption of Mount Vesuvius. But closer inspection reveals modern-day detritus that betrays the more primitivist style, with bits of plastic tags, sequins, and stickers finding their way into the mix.

Other lint works appear more doll-like, accented with blank eyes made of rivets and screws, spindly arms, and outfits made of mismatched fabric scraps and strips of plastic. It’s impossible not to be amused by these pieces, as they feature creative touches like a bosom made of a broken screw-top bottle cap, or a single caster wheel serving as a wonky top bun.

In a time when consumers are becoming more aware of the dangers of waste, leading to, among other things, the banning of single-use plastic bags and straws, Discarded strives to highlight the issue in a gentle, non-preachy way. It also reminds viewers of why Capezzuti continues to be one of the most visible figures in the Pittsburgh art scene.

Search 60,000 images by Charles “Teenie” Harris at In Sharp Focus, a new permanent gallery and interactive installation at Carnegie Museum of Art