“There are a lot of expert movers out there who aren’t dancers.”

Ten years ago, as a rare side effect to chemotherapy for her breast cancer, Maria Sheridan lost an ability about 7 billion people take for granted: to know, without looking, where their arms and legs are.

The capacity to judge the relative position of one’s body parts is called proprioception, and Sheridan, at age 32, no longer had it. While she could still tell her limbs to move, nerve damage from the chemo meant that they couldn’t talk back. If she closed her eyes while standing, or even sitting, she would simply fall over. Tasks she once did without thinking, like buttoning a shirt — or walking — now demanded her full visual attention. “The more I have to think, the less I can move,” says Sheridan. “The more I have to move, the less I can think.”

Her sense of touch was also affected, so that that she could no longer distinguish, for instance, between sharp objects and dull.

Sheridan, a Johnstown native, then lived in San Francisco; she moved to Pittsburgh in 2012. She has adapted to her disability, known as profound peripheral neuropathy, well enough that a casual observer might not guess that she is disabled. But neither is Sheridan — who also has rheumatoid arthritis — someone you’d expect to see onstage, performing in a contemporary dance work. Yet that’s where she’ll be Nov. 13 and 14, in collaboration with Pittsburgh’s most widely known dancer with a disability, Bill Shannon.

Their work-in-progress with two other artists, Stay Up, was developed and guided by Shannon based on two movement workshops he ran last summer for adults with disabilities as part of a Kelly-Strayhorn Theater residency. Years ago, Shannon adapted to his own degenerative hip condition by locomoting on rocker-bottomed aluminum crutches, a skill he’s plied as a dancer and performance artist on stages and streets worldwide; his resume include choreography for Cirque du Soleil. Shannon’s work (which also includes visual art) has explored themes including how nondisabled people treat the disabled, and the movement strategies of people who can’t move “normally.”

Photo by Heather Mull
Maria Sheridan rehearses Stay Up at the Alloy Studios.

“There are a lot of expert movers out there who aren’t dancers,” he says.

The summer workshops, called Translations, included just two participants: Sheridan and Ru Emmons, a nondisabled dancer who then had a broken ankle. For everyone, the learning curve was steep. For instance, says Sheridan, when Shannon assigned her to compile a list of 30 everyday movements, “I would come back with a list of things I do to keep still” — often the biggest challenge for someone who must tap her feet at bus stops to keep tabs on her legs. After the workshops, Shannon invited her and Emmons to pursue creation of a full-length performance that would, in part, translate Sheridan’s movement vocabulary into dance, and explore its connections to “able” movement. (The project is funded by an Investing in Professional Artists Grant from the Pittsburgh Foundation and Heinz Endowments.)

Photo by Heather Mull
Bill Shannon at a Stay Up rehearsal

Sheridan, who works as a systems analyst, has an upbeat personality and a matter-of-fact attitude about her condition. She had an active childhood and in college studied physical theater. “My desire to move has always been very strong,” she says.

At a recent rehearsal for Stay Up, at the Kelly-Strayhorn’s Alloy Studios, she practiced a sequence in which, flat on her belly, she drags herself across the room with painstaking, swimmerlike swings of her arms that end with booming handslaps on the floor. Emmons joins her, locomoting similarly; later, Emmons acts as an able-bodied “ally,” at one point offering a water bottle to Sheridan’s lips. (One subtext is a widely seen video of a Shannon street performance in which a passerby, quite unnecessarily, offers him a drink from a water bottle he’s trying to reach.)

Sheridan says her utilitarian movement style draws on everything from yoga to a long-ago modern-dance class. When she rises from a prone position on a couch, she says, “I kind of have to fling myself.” A solo she rehearsed began with her seated in a folding chair, then lunging out of it and advancing across the floor by taking, alternatingly, tiny steps and giant, awkward ones. 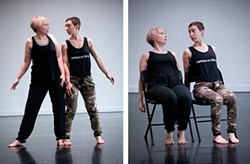 Sheridan, for her part, enjoys the exploration that goes into Stay Up. During rehearsal, she holds up one of her sneakers, its outer heel worn steep by her long, counterbalancing strides. “Bill’s got rocker-bottomed crutches,” she quips, “I’ve got rocker-bottomed shoes.”