“We want to bring people together.” 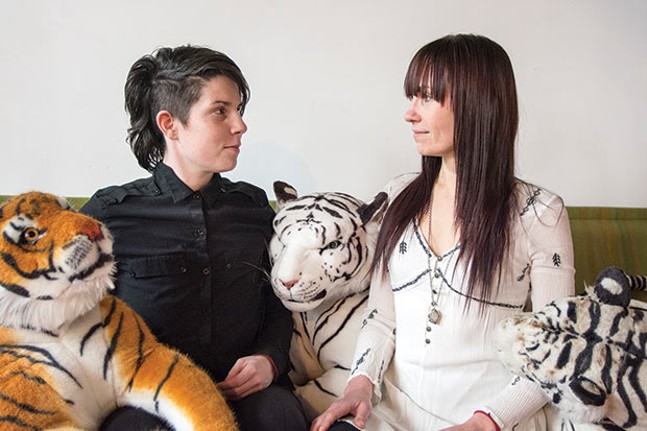 Dinosoul has been through a lot. Most recently the band ended up having to record its latest record twice (the first attempt ran into some technical issues). But despite personnel changes and personal challenges, the members of the band pushed through to complete their debut full-length, Eleven. The 11 tracks combine to deliver a sonically enormous synth-pop-meets-indie-rock record, filled with ethereal synths and vocals as well as personal journeying.

Dinosoul is couple Donny Donovan (vocals/guitar) and Carolyn Hilliard (vocals, keys), joined by drummer Glenn Durham. The three come from different musical backgrounds, but the sound they create carefully blends all three of their distinct styles to form a dark pop energy. Eleven is a record that mostly consists of songs crafted by Donovan and Hilliard that were brought to the band, and some of those songs were written as long as four years ago. In the lead up to the release, Donovan has been discussing the songs a lot.

“The more I talk about these songs, I realize that a lot are about our relationship; a lot are about society from a neutral stance. It’s more about a desire for people to connect rather than find difference and hate each other,” says Donovan. “Our music is about love, but it’s also about self-awareness and self-development.”

In an effort to bring that kind of inclusive, connected energy, the band is celebrating its release at Mettā: A Healing Arts Community. It’s a space not typically used for shows, but the band wanted a space that would be airy, spiritually charged and alcohol-free. Donovan and Hilliard are sober and wanted to create an environment in which families could come together (kids tickets cost less) and where people could feel safe. The event will feature live painting, local artists and vendors, food from Relish and non-alcoholic specialty drinks.

“We started this band based on a vision that we saw, and we want to spread that vision to the world. I have an intention, a mission statement, that we say before each show that brings us together and reminds us of that vision,” says Hilliard. “We want people to connect and have a beautiful time.”

“We want people to be present, meet new people,” adds Donovan. “We want to bring people together.”

Pittsburgh’s music scene is booming with many talented LGBTQ artists