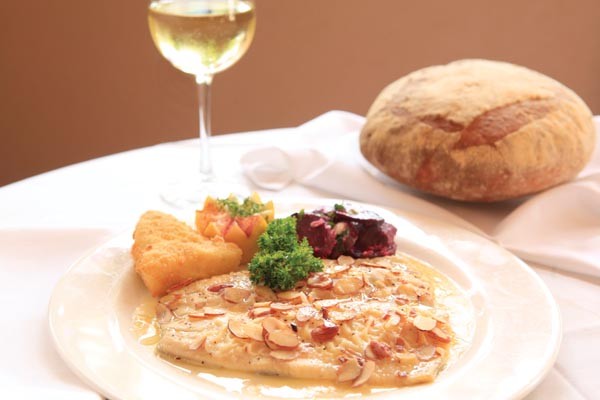 At D'Imperio's, a white-tablecloth Italian restaurant in Wilkins Township, Tony D'Imperio has been wining and dining the denizens of Pittsburgh's eastern suburbs since we were kids. His is a classic story of immigrant success. He began washing dishes in an Italian-American club when he was a kid, worked his way through school and college, learned the restaurant business firsthand, and opened a dining spot of his own that became a favorite of Mayor and Mrs. Richard Caliguiri. D'Imperio's is still a tradition for birthday and anniversary dinners in many local families, and a veritable time capsule of pictures on the restaurant's website attests to the good times had at celebrations past.

Any restaurant with that kind of history qualifies as an institution, so we thought we'd stop in to see what's going so right. D'Imperio's decor is old-school elegant, with gilt-framed Italian landscapes on the faux-frescoed walls and fresh flowers on every table. The fact that D'Imperio hasn't seen the need to update the decor to reflect a current preference for contemporary style and graphic motifs makes it feel comfortable and unpretentious, not dated. Our servers, likewise, struck a note that was polite but not officious, friendly but not overly familiar. We were sorry it was a little too cool the night we were there to partake of the restaurant's expansive outdoor patio. Although it faces the parking lot, bowers of flowers and an extensive potted kitchen garden — tomatoes, peppers and herbs — manage to bring a bit of the Tuscan countryside to the William Penn Highway.

The menu passed two of our prime tests: It's brief, indicating a kitchen that focuses on its strengths, and it defies ubiquity in favor of dishes not readily available elsewhere. In place of the stereotypical litany of pastas, veals and chops that define Italian-American dining, D'Imperio's offers a carefully curated list of roughly a half-dozen each of antipasti, starters for two, pastas and proteins. The starters were mostly familiar, but in the entrees, few of the usual suspects were to be found.

Our first shared appetizer made us feel we were off to a good start. Polpetti, or beef meatballs, were tender, where meatballs without pork and veal are all too often tough and dense. The sauce was a simple marinara enriched with the juices and fat of the meat. 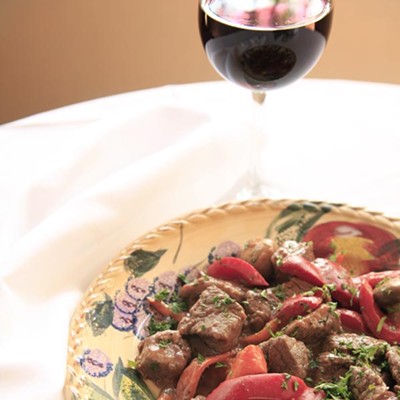 The polpetti stood in stark contrast, however, to our other starter: the blandest calamari we've ever encountered. Despite an aroma of lemon that accompanied them to the table, there was virtually no citrus flavor, or detectable salt, pepper or other seasoning, to pump up the flavor of these sad cephalopods. Not even the customary lemon-wedge garnish. Though the breading was light and crisp, the rings tender and the marinara bright and fresh, without seasoning, we found little satisfaction.

Our salads and soup extended the mixed results. The house Italian salad was modern, featuring tender, dark greens, and creative, with matchsticks of fennel in addition to red pepper, grape tomatoes and green olives. But the Caesar salad failed on numerous counts, from its overabundance of pale, iceberg-like leaves to a dressing that was too creamy, tipping the flavor balance away from the citrus and salt that are part of this salad's appeal. A shrimp bisque was satisfying, however, with plenty of small bits of shellfish, a rich body and well-balanced flavor.

Penne with truffled cream and Parmigiano — essentially an Alfredo sauce with truffle oil — was, like the calamari, underseasoned given its inherently mild base of ingredients. In this case, however, there was enough underlying flavor that a dash of salt and a generous hand with grated parmesan raised it to an enjoyable level. A New York strip steak featured a decent cut of beef, indifferently cooked, but accompanied with beautifully grilled red peppers, sweet, juicy and slightly smoky.

Our server warned us that gnocchi in lamb ragu would not be chock-full of ground or shredded lamb; apparently this has been a source of repeated customer disappointment. Angelique adjusted her expectations and ordered it anyway. There was a single medallion of lamb in the dish, but the lamb flavor that was supposed to have infused the tomatoey sauce was otherwise subtle to the point of not really being there. Worse, the gnocchi were heavy and gummy.

Shrimp fiorentina, in a creamy sauce with artichoke hearts and spinach, may have been the most successful dish of the night. The bleu cheese that made the sauce agreeably tangy also made it perhaps a bit too sludgy, but the shrimp were plump and juicy, the spinach bright and lemony, and the artichokes rich yet tartly vegetal.

Although the food at D'Imperio's was far from uniformly impressive, the restaurant offered a pleasant dining experience. D'Imperio's bucks the vogue for modern cuisine, continuing to serve old-fashioned Italian-American fare in an atmosphere of traditional elegance; we suspect the restaurant, and its menu, would still be recognizable to its original patrons despite changes in location, decor and individual dishes. But dining at D'Imperio's doesn't come cheaply; even the penne, in a sauce without meat or even vegetables, cost as much as a seat at the symphony. At this price point, we expect perfect harmony.