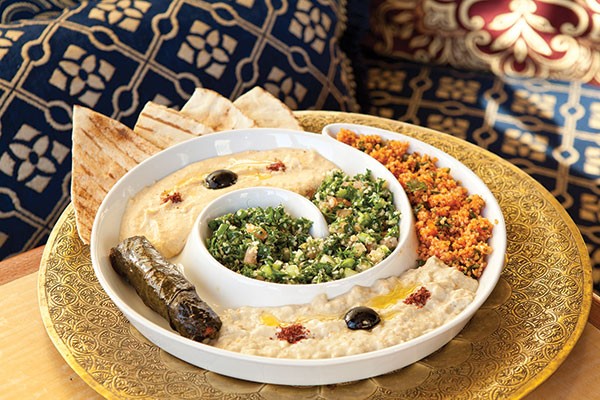 There tend to be tight relationships among the cuisines of the Mediterranean basin. Due to trade and climate, menus from Morocco to Lebanon vary but slightly. In the eastern Mediterranean, items like falafel, hummus, kebab and baklava are claimed by practically every country, even those landlocked countries farther east.

Evidence for this proposition comes to us via Dijlah, a new Iraqi restaurant. On a menu that focuses on starters, kebabs and sandwiches, we identified a scant few dishes that weren't familiar to us from other Middle Eastern restaurants. But novelty isn't everything, and we were eager to see how Dijlah's kitchen would handle the classics.

The decor immediately transported us far from the slushy streets outside, evoking the rich colors and textures of the Islamic world with draped fabrics, Oriental rugs, tin-and-glass lanterns and benches cushioned in elaborately embroidered upholstery.

It was a chilly night, so we mostly passed over cold starters for hot, with a single exception: Kisir, or red tabuleh, promised something new, and it was a pleasing variation on the classic cracked-wheat salad. The main difference was the addition of tomato paste, which thickened the texture, added a sort of earthy acidity to the flavor and contributed the dish's distinctive rusty color. The bulgur predominated over the parsley, which increased the heartiness, creating a substantial vegetarian dish that mediated between the simple shredded lettuce and cabbage salads that accompanied the entrees, and the heavier meats and rice which comprised them.

In fact, our dining companion remarked that next time, she'll make a meal of appetizers alone. Her lentil soup, with the character of a puréed yellow-lentil dal, was supremely satisfying. Falafel were crisp on the outside, nicely crumbly on the inside and subtly seasoned. With their crispy fried wrappers, sigara borek resemble little tubes of spanakopita, and come filled with either feta or potatoes and parsley. We chose feta, and its bold brininess held up well against the crisp shell.

Dijlah's obligatory spinach and spinach-feta pies were also well proportioned, their relatively thin dough surrounding bright, moist spinach filling and, in the case of the latter dish, a generous scattering of crumbled, creamy feta cheese. A nice touch was that the pies were reheated on a grill, not in an oven, so that they came with grill marks and even a faint waft of smoke.

The grill left a more substantial char on the chicken wings, which created its own flavor, but — alas — obscured the garlic spice sauce and paprika that were applied beforehand. A final brush with the garlic would have been welcome.

Shawarma showcases a wonderful technique: A slow simmer infuses chopped meat with sauce even as the liquid itself evaporates, leaving the meat tender and soaked with flavor. Dijlah uses tenderloin in its beef version (there's also chicken), but the texture was less tender than we expected from that cut; perhaps its leanness didn't hold up to the long cooking. Nonetheless, the flavor was excellent. A subtle level of spice built with each bite, while bits of onion, cooked near to melting, offered sweetness among the savory morsels.

A kofte sandwich, wrapped in pita, offered that wonderful beef patty that should never be confused with a burger, as the spicing is the primary focus in preparing kofta, and loose packing of the ground meat makes for a lighter texture. Dijlah describes its spice blend as "delicate," and while it was not as assertive as some, we found it by no means bland. 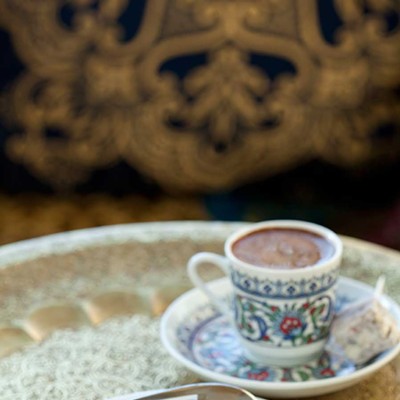 Iraq kebab was a mix of coarsely chopped — not ground — lamb and beef, formed into two oblong patties and served simply alongside rice and green salad. The two meats were coarsely blended as well, so that the distinctive flavor of the lamb stood up to the robust one of the beef. Smoky notes from the grill deepened the flavor profile still further, and a bit of ground spice sprinkled on top stood out more for not having been blended with the meat. This was a dish elemental enough for the burger-loving kids in our party, but complex enough for adults craving foods we don't ordinarily make ourselves.

Otherwise, Dijlah's broad Middle Eastern menu did not tell us much about how, or even if, Iraqi cuisine is distinct from what we Americans have come to call, simply, "Middle Eastern." But in representing this broad genre, it excels.