Did the Penn Plaza situation in Pittsburgh’s East End have to unfold the way it did?

“They knew all along what they wanted to do.” 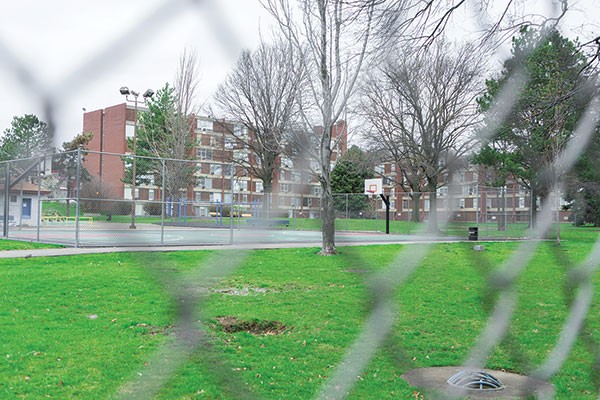 In February, Pittsburgh Mayor Bill Peduto held a press conference announcing the successful relocation of the vast majority of Penn Plaza residents, and one theme came shining through: teamwork.

“We are not claiming victory, but we are showing what can be done when people work together,” Peduto’s chief of staff Kevin Acklin said at the press conference.

Last summer, LG Realty Advisors (run by the Gumberg family) issued a 90-day eviction notice for residents of Penn Plaza, a two-building, below-market-rate apartment complex in East Liberty. The city stepped in and brokered an agreement between all parties that provided relocation assistance and monies to the tenants; cooperated with the Gumberg’s zoning-change requests (including the conveyance of part of a small public park); and created a fund to pay for future affordable-housing projects.

At the February press conference, city officials repeated that the city and Penn Plaza tenants had little legal ground to stave off evictions. Lillian Grate, of the Penn Plaza tenant council, said the residents were “thrust into conflict” and applauded the Gumbergs for coming to the negotiating table.

Acklin, who served as lead negotiator for the city, also lauded the negotiation process and the “teamwork” that secured assistance to the residents and affordability promises for East Liberty.

However, new information indicates that LG Realty was not as forthcoming and cooperative as previously thought.

A few weeks ago, City Paper wrote that two dozen residents from the first Penn Plaza building to come down (5704 Penn Ave.) had formed a crisis committee because they hadn’t found replacement homes, even though there were possibly 50 units available in the other Penn Plaza building (5600 Penn Ave.).

In February, CP asked attorney Jonathan Kamin, who represents LG Realty, why the residents could not just be moved over to 5600 Penn Ave. Kamin said that many of the vacant units had been taken offline over the years and needed full renovations to become livable again. Furthermore, after a public hearing about the rezoning of Enright Park (which will potentially be partially conveyed to LG Realty), Kamin said that the owners hadn’t accepted new tenants at Penn Plaza for a few years.

Does the admission that units were intentionally taken offline, and that the buildings weren’t accepting new tenants for years, indicate that the Gumbergs knew they were going to renovate the structure well before their June 2015 eviction announcement?

Randall Taylor, a former 5704 Penn Ave. resident and member of the tenant council, says yes. Taylor attended many of the negotiation meetings between the tenants, owners and the city last fall. At one meeting, says Taylor, Kamin said the Gumbergs knew they were going to renovate since 2012. (Kamin told CP in March that LG Realty had been conducting development studies of the area for four years.)

“I moved in in 2012. I wished they would have told me then about their plans,” says Taylor. He says the crisis the residents were thrust into was caused by the company because “they knew all along what they wanted to do.”

Kevin Quisenberry, the attorney for the tenant council, also says the owners knew they were going to renovate, but failed to inform the tenants in a timely matter. He remembers a meeting in July 2015 when the owners said “they already had a firm agreement with an anchor tenant” for 5704 Penn Ave.

At the March public hearing, Rick Swartz, of the Bloomfield Garfield Corp., spoke in opposition to the rezoning of Enright Park. He also said LG Realty has a new tenant lined up for 5704 Penn Ave., but that the company hasn’t shared many specifics about the development, which Swartz says is contrary to typical community-outreach practice.

“They want this to happen in a much quicker process,” says Swartz. “To evict 200 people to achieve a vision but not tell people what that vision is going to be, doesn’t make sense to me.”

Kamin says he rejects the narrative that this was rammed down the community’s throat. He says Penn Plaza management over the years had encouraged residents to find new homes well before announcing evictions. (Bill Bartlett, of advocacy group Action United, who has been working closely with many Penn Plaza tenants, disputes this and says tenants have told him the opposite.) Kamin also says LG Realty can’t move forward with their plans until they know the limitations of their future zoning.

“We are at the beginning of the process. The first step is to know the rules,” says Kamin.

Acklin says that, at the least, a portion of the park will remain public.

“I understand the lack of trust by residents, but the city can play a role to better the park,” says Acklin.

Quisenberry also believes some positive lessons can come out of this. He thinks that in situations similar to Penn Plaza, the city should require landlords to give significant advance notice and mandatory relocation assistance. He believes the city should also require inclusionary zoning for new developments, so that new structures include a set percentage of affordable housing.

Peduto also believes the attention paid to Penn Plaza sets a precedent for other developers in the city. “Every private developer now will look towards Penn Plaza and know they can’t just issue 90-day evictions.”