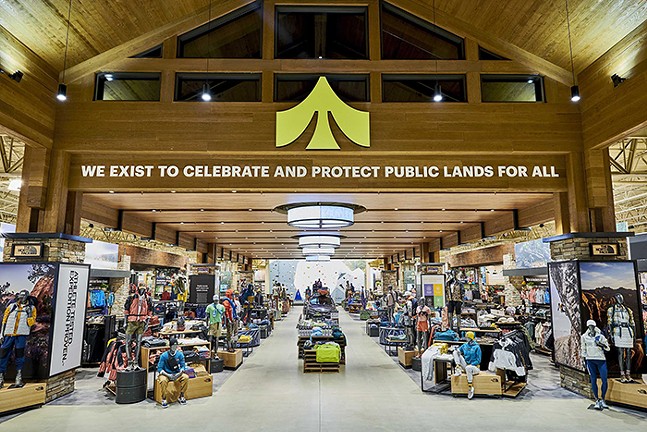 Photo: Courtesy of Dick’s Sporting Goods/Public Lands
Public Lands store
Dick’s Sporting Goods has been supplying rackets, cleats, protective gear, and other sports equipment to the Pittsburgh region for decades. Since then, the chain has expanded nationally, but is still based out of Moon Township. And now the locally based retailer is expanding into a new frontier, while still focusing on its roots.

Dick’s announced the grand opening of the first Public Lands, its new outdoor specialty store concept. Set to open on Sept. 24 in Cranberry, the location is described in a press release as “helping more people get outside to explore and protect America's public lands.”

The company promises that Public Lands will carry a “premium assortment” of outdoor and lifestyle apparel, footwear, and equipment brands. The 50,000-square-foot store will also feature on-site amenities like a 30-foot rock wall, a gear repair and rental department, and specialized shops dedicated to various outdoor activities like biking, camping, fishing, hiking, and more.

Dick’s says Public Lands will also fulfill the company’s stated mission to “support the local outdoor community through conservation and access & equity-based initiatives.” On Aug. 31, Dick's announced the creation of The Public Lands Fund, designed to “support local and national initiatives that protect new lands, improve existing lands, break down the barriers of access to outdoor experiences and improve inclusion and equity in the outdoors.” As part of this, Dick’s plans to donate 1% of all gross Public Lands sales to support the fund.

"At Public Lands, our mission is to celebrate and protect public lands for all," says Public Lands president, Todd Spaletto, in a press release. "We want to do this in a meaningful way and partner with organizations that have already accomplished – and continue to do – incredible work to ensure our public lands and outdoor spaces are clean, preserved, and open for all.”

Spaletto added that moving forward, Public Lands would work with its nonprofit partners to “support their missions and collaborate on programs that get more people into the outdoors” and take care of local, state, and national parks and recreation spaces. He says the Pittsburgh-area Public Lands store team has already logged 224 total hours volunteering with local nonprofit partners doing trail restoration, cleaning up and breaking new trails in local Pittsburgh parks and lands.

The Public Lands Fund will also benefit national environmental organizations and ones in Columbus, Ohio, where Dick’s will open a second Public Lands in October.

In addition to supporting nonprofits, Public Lands will also supply products made by some Pittsburgh small businesses. The Millvale shop Tupelo Honey Teas recently announced on Instagram that it created three tea blends being sold exclusively at the Public Lands store. Tupelo even gave out samples of the teas during the store’s soft opening in August.