The soft, sketchy chalks are more brilliant than oils and perfectly suited to a painterly technique 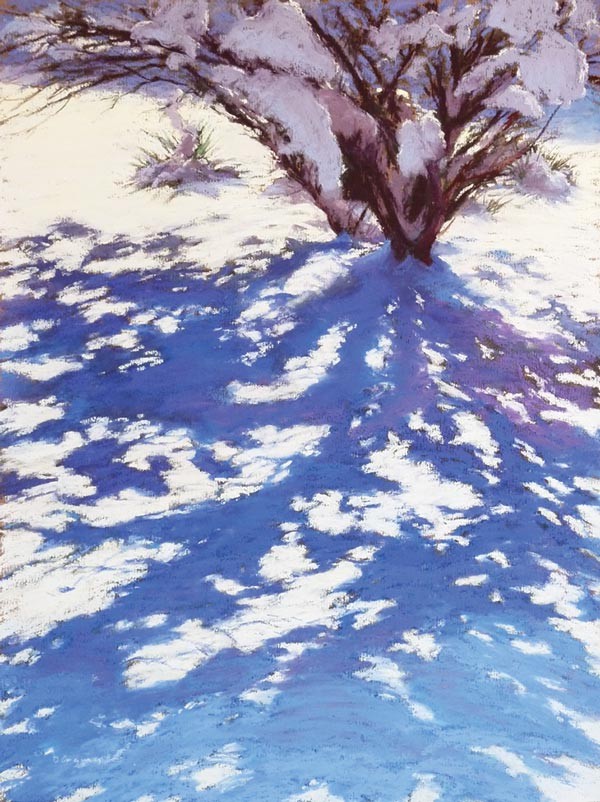 Image courtesy of Gallery on 43rd Street
"Shadows on Snow," by Diane Grguras

The plein-air tradition is revived in an excellent exhibit of Diane Grguras's new pastels at the Gallery on 43rd Street. Working mostly in the long tradition of landscapes, Grguras is inspired by the natural world that she strives to interpret and not merely represent, using impressionist techniques to suggest outdoor light and employing an unerring craftsmanship.

In an interview, Grguras avows that she sees the hand of God in nature. A background in medical illustration informs her insights into the biology of living things. For instance, she sees trees as entities that tell stories about the environmental conditions shaping their growth. In the exhibit, we see trees in sumptuous forests, groping trees covered in snow, a cherry willow lyrically swinging its yellow-green branches in a summer wind.

Grguras' method requires concision and quickness. While she sometimes uses photos, she recognizes that "intangibles" can be found only while working before nature itself. The soft, sketchy chalks are more brilliant than oils and perfectly suited to a painterly technique. But Grguras also excels at detail. She paints the curly white wool of a grazing ewe, the ringlets so defined that you could touch them.

The painting "Tree at Childmark Pond" has a monumental quality and unpretentious manner that might qualify for comparison to the artist's revered precursor, William Wendt. The nearly abstract "Shadows on Snow" depicts the brilliant white light of sunlit snow mottled by blue shadows from a bush that covers three quarters of the painting. "Glimpse" shows unusual atmospheric formations over the ocean that are at once mysterious and awesome.

One notes that Grguras might be a little too academic in her penchant for violets and blues, but this is often overcome by the high key of the work. It is singular that we have such a dedicated artist working quietly among us, able to reveal a state of being we long for.