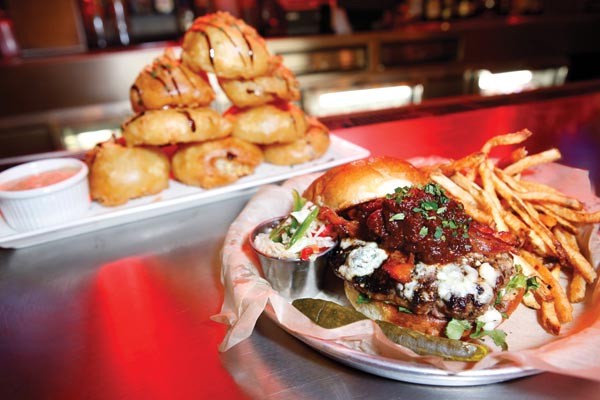 Now seems as good a time as any to reveal that we have a couple of pet peeves when it comes to dining out. One is being expected to pack our own leftovers, juggling containers and lids on a table that is still crowded with dirty dishes and half-full glasses. Even -- especially -- at places where service has been good, it feels like an affront to be handed a stack of clamshells and left to fend for ourselves at the end of a pleasant repast.

Peeve No. 2 is the industry assumption that kids will eat only food that's been dumbed down to simple starch, processed protein and American cheese. Our kids are as childish about food as most, averse to spice and skeeved out by unfamiliar ingredients. But we find ways around this that don't involve junk at home, and expect the same when we go out.

As pertains to Diamond Market, we'll return to both of those things in a moment, but first, the good news -- of which there is plenty. As Market Square gets its groove back, Diamond Market's name hearkens to the square's past, when it was called the Diamond and dominated by a public market building in the center. Black-and-white photos on the eatery's walls document those days of yore; the straightforward and tavern-like décor, meanwhile, provides a comfortable, unpretentious setting for socializing after work, shopping or skating at the nearby PPG rink. We suspect that once Diamond Market develops a patina of age, unknowing visitors might think that it actually dates to the middle of last century, so well-considered are the art-deco touches like red neon, ribbed glass and sleek, streamlined moldings.

It was enough to put us in the mood for a good, old-fashioned meal of burger and beer, and Diamond Market delivered. The menu bridges retro and au courant in a now-familiar way, with grownup comfort food and big burgers on brioche buns with fancy toppings. It also offers a limited, changing dinner menu. While the fare includes legitimately upscale dishes like seafood in a tomato-cream sauce, it consists mostly of up-to-date takes on traditional food, such as deviled eggs and potato-and-feta pierogies.

We decided to go with a couple starters whose mouth-watering descriptions promised to go down easy with the kids at our table. We chose macaroni and cheese, consisting of cheddar, gruyere and pepper jack melted over cavatappi pasta with bacon and truffle oil. The other order was "engagement" grilled cheese, whose mysterious moniker translates to parmesan-crusted country bread stuffed with cheddar, gruyere and cambozola cheeses, with a side of roasted-tomato purée for dipping. It was when these plates were delivered that our kid-food peeve was triggered: Although we'd thought we were clear that we were ordering off the regular menu, what we got was ordinary macaroni and grilled American cheese.

Once our server rectified the situation, however, we were very pleased. The mac-and-cheese featured a complex blend of sharp, creamy and nutty cheese flavors, underscored by the earthy truffle oil, and accented by crunchy breadcrumbs and diced bacon that retained its meatiness. It was an excellent rendition of a classic dish, while the grilled cheese was actually transformed into something more. It arrived on a long, rectangular plate, on which four squares of sandwich were lined, floes of excess melted cheese spanning between and atop them. In particular, some of the molten cheese had crisped on the griddle, adding dimensions of both texture and deep, browned flavor. A sprinkling of diced tomato lent a little brightness, while the little cup of tomato purée -- a gesture toward tomato soup -- was a nice idea, but really just made us wish for a bowl of the real thing. (Also, alas, it was cold.)

After all this, it was our order of onion rings that really wowed us. The size of donuts, the rings arrived piled high into a pyramid of staggering size and drizzled with a balsamic reduction. The beer batter was puffy yet crisp, while the onions within were soft and sweet, and the spicy remoulade served alongside punctuated their mild flavor with its piquancy.

Jason ordered molasses-brined pork chops with barbecue sauce, despite his leeriness of too-sweet sauces. The thin chops were remarkably rare, and the brining had allowed the meat to remain moist even as the grill had left appreciable char. Unfortunately, the brine had also left far too much salt behind, and each bite became a battle between not just savory and sweet, but salty and saccharine. A crisp Carolina-style slaw helped restore some balance, but overall the dish fell short. (As it happens, it was cycled off the menu between our visit and publication, so perhaps diner feedback made it to the kitchen.)

A steakhouse burger -- topped with applewood bacon, bleu cheese, cracked black pepper, balsamic marinated tomatoes, lettuce and parsley mayo -- struck the final, satisfying note to our meal. This dish seemed to epitomize what Diamond Market does so well: Take a classic, simple tavern dish and upgrade each ingredient in concert with the others, creating a cumulatively enhanced offering.

Though we were conscripted into packing our own leftovers, we were glad to have them. As Market Square strives to become a fashionable Downtown dining scene, Diamond Market provides an anchor to its past while easily pleasing the more sophisticated modern palate, kids included.