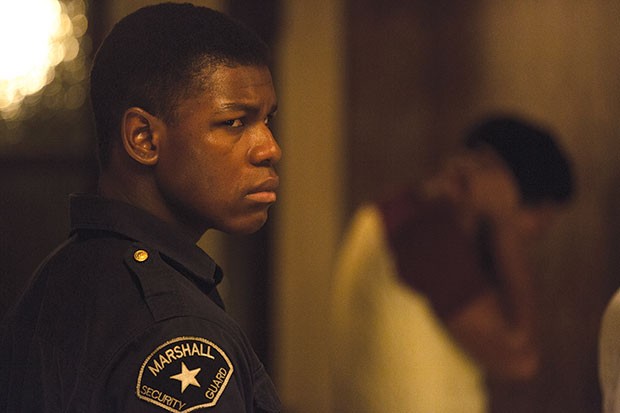 Kathryn Bigelow’s docudrama Detroit depicts events that happened 50 years ago during the city’s infamous riots, but today’s viewers will surely process this film through the lens of current events. It’s white cops abusing black citizens, and it’s disheartening that five decades later, a teenager can easily relate without any foreknowledge of the specific historical events. Detroit does begin with a mini history — depicted in animated oil paintings — which sets the racial, social and economic conditions that helped spark riots in several cities in 1967, including Detroit.

The first third plays out in a wide documentary style, often incorporating archival footage and audio. It begins with a police raid on an after-hours club on July 23 that sparked several days of unrest, including looting, arson and arrests, as the army and National Guard joined city and state police on the streets. The primary character here is simply the city itself, be it frightened citizens, burning buildings or grim-faced cops. Slowly, the film focuses in on a few people, and the event that will bring them all together.

Two are members of the nascent R&B group The Dramatics, Freddy (Jacob Latimore) and Larry (Algee Smith). They wind up at the Algiers Motel, where they meet two young white women and some of their friends, including a Vietnam vet (Anthony Mackie). A block away, a black security guard named Melvin (John Boyega) watches over a store. When it seems like sniper fire is coming from the motel, Melvin and a trio of Detroit police, dominated by the hot-headed Krauss (William Poulter), respond. The cops round up everybody in the lobby — “I’m going to just assume you’re all criminals” — and a night of horrific actions and consequences unfolds.

The next hour of film is harrowing: It depicts in close quarters, and vivid close-up, sustained violence, racial animus and psychological abuse. (It is also a presentation of abuse enacted on African Americans depicted by a white filmmaker for entertainment, and criticisms of this are likely to join the wider cultural discussion.)

The final third of the film covers the follow-up investigation and court case. But the chances of institutional fair play for the victims seem as elusive as the presumption of innocence denied them back at the motel. Viewers will note with some irony that one of the criminally charged cops complains that “something that took one minute shouldn’t define your entire life.” At the end of Detroit, it’s clear that that night at the Algiers changed a lot of lives — and ended some others. Left unsaid but still explicit is how much larger change is left to happen.