The charming characters, in Dominique Morisseau’s play, come alive in a feast for the ears and eyes 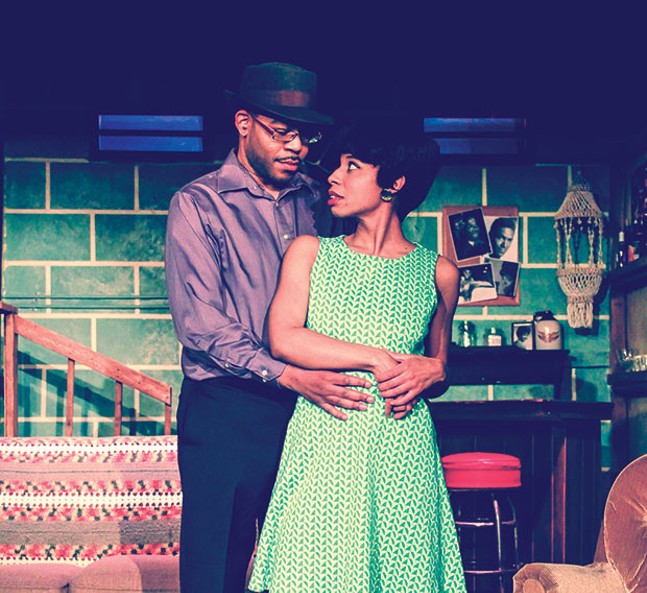 To people of a certain age, “long hot summer” conjures not images of lazing by the beach, but fear (and indeed, loathing) in seething urban areas across the U.S. in 1967 and beyond. That tumultuous period provides the backdrop for Detroit ’67, a neat family drama now gracing the stage of New Horizon Theater.

Award-winning playwright Dominique Morisseau deftly uses period music to amplify and underline the action in her 2013 play, which is still a bit rough around the edges. The music, of course, is Motown classics that in their heyday routinely topped the pop chart. There was no “genre” (charts weren’t all sliced and diced as they are today), and the Supremes and Temptations were up there with The Beatles. The idea that a black guy would be surprised by a white girl who likes “Negro music” (a ’50s concept) … well, as I said, rough spots.

Detroit ’67 centers on an adult sister and brother disagreeing about their inheritance (thank you, Raisin in the Sun and Piano Lesson). Ages? Michelle/Chelle, a widow, is old enough to have a son in college. Her somewhat younger brother, an Army veteran, is, of course, the one who wants more out of life. He’s even named Lank, short for Langston (as in Hughes, whose poem “Montage of a Dream Deferred” provided the “raisin” for Lorraine Hansberry’s Raisin in the Sun).

Directed by Herb Newsome, the tight ensemble moves well together. Particularly notable is Leslie “Ezra” Smith as Lank’s quirky buddy who grows into so much more. Alexandria Danielle King and LaMar Darnell Fields, the quibbling siblings, strive mightily with occasionally overwrought dialogue and clichés. Tajionna Anderson and Alexandria Glotfelty do as well as they can, respectively, as the comic-relief family friend and the mysterious white woman whose rescue stirs the plot’s pot.

The devastation and horrors of that July in 1967 affect, if not motivate, the core of the play, but the charming characters of Detroit ’67 come alive in a feast for the ears and eyes.