Determining the right mint julep for the Kentucky Derby

CP Photo: Amanda Waltz
It’s Kentucky Derby season, and you know what that means: an obligatory article about the mint julep, the drink famously associated with the race. Consisting of bourbon or rye (preferably from Kentucky, of course), simple syrup, mint, and crushed ice, and traditionally served in a chilled silver cup, the mint julep pairs well with fat wallets and big floral hats.

I’m sure it would surprise no one that a cocktail hailing from the 19th century American South has a complicated history. My research uncovered its early origins as a more medicinal and far skunkier version imbibed by Southerners dealing with the heat. As the drink was a favorite among plantation owners, some experts credit Black slaves with creating the refreshing concoction we know today, claiming their contribution was erased by white-written history.

Regardless of where the drink came from, as long as people gather to see one of the most high-stakes horse races in the world, the mint julep is here to stay. Churchill Downs, the site of the Derby, claims to sell well over 100,000 juleps each year during the big event. But which julep are you drinking exactly?

You have the Classic Mint Julep, a recipe consisting of three key ingredients, or Clay’s Kentucky-Style Mint Julep, an approach popularized in the early 19th century by Kentuckian and U.S. statesman Henry Clay. More importantly, which one will I, someone who has never had a mint julep in her life, prefer?

As a fan of mojitos, the white rum-based cousin of the mint julep, I assumed that I’d have a positive first experience. However, I was quickly reminded of my aversion to bourbon — one whiff of the Evan Williams I bought, which, to me, smells like someone set a bag of caramels on fire, nearly made me gag. Fortunately, the mint is the dominant smell, setting aside any concerns that I’d be holding my breath through each sip.
click to enlarge 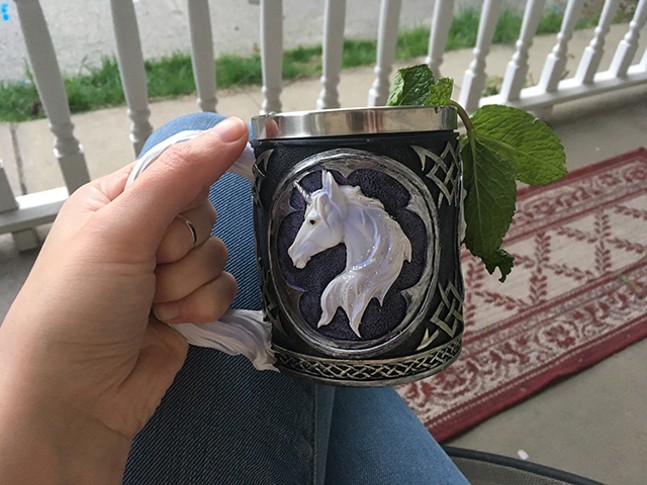 Both recipes call for the one item I lacked — an elegant silver cup. This provided a perfect opportunity to break out the metal-lined novelty unicorn mug purchased at the Pennsylvania Renaissance Faire, a surprisingly appropriate choice for this equine occasion.

As a sparkling water head, I assumed I would prefer Clay’s Kentucky-Style Mint Julep, which calls for San Pellegrino. But the addition of lemon didn’t quite mix, the citrus adding an unnecessary component to an already pungent, flavor-heavy drink. I ended up adding more sparkling water to make it drinkable.

The Classic Mint Julep came out the clear winner with its sweet, simple, easy-going charm. It was also far less messy compared to Clay’s version, which uses granulated sugar as opposed to simple syrup.

The juleps did have one thing in common; they both gave me a massive, instant headache, something I’ve never experienced with any other cocktail. So, for what it’s worth, here’s to a hopefully pain-free Kentucky Derby to you and yours.