Despite its thousands of uses, industrial hemp is often overshadowed by marijuana

“The problem lies in the government lumping all of these into one category.” 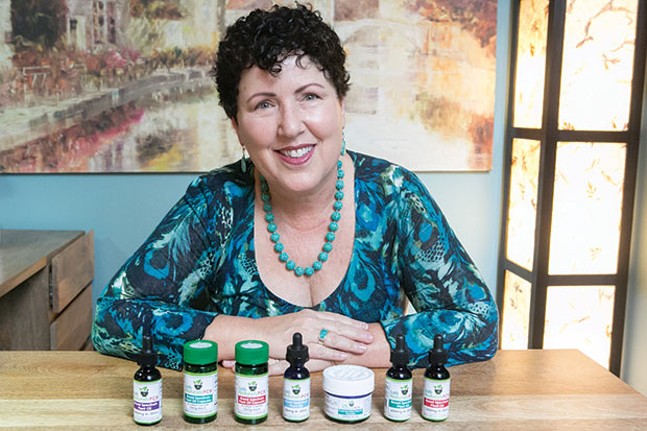 Susan Merenstein’s introduction to healing came behind the counter of her father’s drugstore in Washington, D.C.  At a young age, she watched her father whip up and dole out remedies for the common cold, pain and other ailments.

Today, at her own pharmacy, Murray Avenue Apothecary in Greenfield, she’s following in her father’s footsteps. But with a wide range of products that include supplements to treat sexual dysfunction, her shop is a more modern update on the neighborhood drug store. And the ingredients she uses in her products are unique too.

Merenstein offers a line of LabNaturals PCR Broad-Spectrum Plant Oil products. In simpler terms, the products are made from industrial hemp, a substance that until last year was illegal to grow in Pennsylvania. She says she turned to industrial hemp as a way of helping those with addiction and chronic health conditions, including her husband, who has Crohn’s disease.

“I was extremely interested in helping with the opioid crisis,” Merenstein says. “As a pharmacist of 37 years, I’m in the trenches. There were people constantly coming in with pain, the kind of pain that just ruins your whole day-to-day life.”

Merenstein’s interest in hemp is medicinal. Her products are meant to address health issues such as arthritis, inflammation, nausea, pain and anxiety. But the clinical uses for industrial hemp are just one piece of the picture.

Hemp is a variety of cannabis sativa, a plant species which also includes marijuana. Hemp fiber has been used to make rope, clothes, food, paper, textiles, plastics, insulation and biofuel. And hemp oil has been used to manufacture oil-based paints, moisturizers and cooking oil.

Last month, Gov. Tom Wolf announced the expansion of hemp in Pennsylvania. Fifty permits are available to growers and institutions of higher education for hemp research projects. And the state predicts next season’s industrial-hemp crop could cover 5,000 acres or more.

But response to the expansion of the state program hasn’t been high. As of last week, days before the Jan. 19 application deadline, the state had received few applications. Advocates say part of the problem could be that little is known about industrial hemp. Like a forgotten middle child, hemp is often overshadowed by marijuana. The recent legalization of medical marijuana, in particular, has drawn a lot of attention.

Advocates hope to see industrial hemp edge its way into the spotlight. Being lumped in with marijuana has created a stigma, but advocates say the versatile crop is a proud part of the state’s past and could have a positive impact on its future.

“There’s over 25,000 different uses for the hemp plant,” says David Schmitt of Hemp Inc., one of the largest industrial-hemp companies in the country. “You stand on the street corner and ask 100 people, ‘What is hemp?’ and probably 98 out of the 100 are going to tell you it’s marijuana. It’s not marijuana. That’s what’s so frustrating.”

Merenstein is legally prohibited from making claims about the benefits of her LabNaturals line, which includes oils, topical pain balms and capsules containing water-soluble hemp oil.  (Under current law, supplement manufacturers and retailers cannot assert that they treat or cure diseases.) But she says doctors refer patients to her for a variety of health reasons.

To the uninitiated, industrial-hemp products might sound similar to medical-marijuana products. Both contain cannabidiol, the ingredient believed to have a positive impact on treating certain ailments. But, as mandated by law, Merenstein’s products contain less than .3 percent of THC, the psychoactive ingredient in cannabis. It’s confusing stuff if you’re not a botanist whose job it is to differentiate between industrial hemp and marijuana, and it’s part of the reason industrial-hemp products are still stigmatized.

“The stigma has to do with the cannabis plant itself,” Merenstein says. “The problem lies in the government lumping all of these into one category.”

Merenstein hopes expanding research opportunities around industrial hemp will help reduce this stigma and lead to more beneficial products for those in need.

“There are so many potential clinical applications for this plant in humans and pets. We need more research,” Merenstein says. “It’s a newer frontier, and we need to be very careful and cautious moving forward. We need to do it right.”

Last week, Geoffrey Whaling, chairman of the Pennsylvania Hemp Industry Council, was in Lehigh, Pa. for this very reason. He spent his week at the Farm Show there, promoting the state’s recently expanded hemp-permitting program, and he used his extensive knowledge of the plant to generate interest.

Hemp has a rich history in Pennsylvania, Whaling says. The Hemp Act, which was among the very first legislation passed in Pennsylvania, encouraged farmers to grow hemp. Between 1720 and 1870, there were more than 100 mills for processing hemp fiber in Lancaster County. And Pennsylvania towns like Hempfield were named for the crop.

“Most people don’t think where the origin of the name of their community or school district came from, but it came from the fact that hemp was such an important crop in the community,” says Whaling.

Hemp farming dropped off in the United States in favor of easier-to-grow crops like corn. Later, in the 1930s, hemp was banned completely as part of the overall ban on cannabis. But that doesn’t mean hemp and hemp-based products aren’t still used across the United States.

“We are the largest importing nation of hemp in the world. We bring in hundreds of millions of dollars of hemp annually — both raw products and finished products,” says Whaling. “But we are the only importing nation that doesn’t have a national policy.”

Hemp enjoyed a resurgence over the past few decades, after scientists found a way to differentiate between marijuana plants and similar ones with barely any THC. As a result, the 2014 federal Farm Bill allowed states to reintroduce hemp farming. Since then, 33 states, including Pennsylvania, elected to do so.

There are many benefits to the crop, says Whaling: Every part of the plant can be used, it doesn’t require fertilizer or pesticides to cultivate, and it can grow up to 20 feet in 100 days. Additionally, the Rodale Institute, in Kutztown, Pa. — which was one of 16 organizations to receive a permit for hemp research last year — has found hemp is one of the best crops for suppressing weeds in organic farming.

The recently expanded state program will mean even more opportunities for discoveries about industrial hemp. Permits to grow hemp are for research only, not for commercial use. They are available for farmers who can grow up to 100 acres, and another tier of permits for higher-learning institutions and research centers to grow unlimited acreage. And while industrial-hemp commercialization is still illegal, this year those who acquire permits will be able to sell small quantities of industrial hemp for market research.

“What we heard when we were done last year is that participants were looking for the capacity to really look at the marketplace. So we’ve opened it up and are tripling the amount of applicants,” says Fred Strathmeyer, the state’s deputy secretary for plant industry. “Industrial hemp has not been in the marketplace for quite a few years now, so we’re hoping to educate shoppers about the uses of hemp going forward.”

Education is key, says Schmitt, of Hemp Inc. Schmitt, who serves as chief operating officer of Industrial Hemp Manufacturing, LLC., a wholly owned subsidiary of Hemp, Inc. recently developed a way to use hemp to create an additive that prevents drilling oil from escaping into the earth. He says uses for the plant are nearly endless.

Today, car manufacturers like BMW, Mercedes and Ferrari are using hemp fiber for car interiors. The crop is also replacing carbon fiber in car-body construction. But Schmitt says these uses pale in comparison to the health benefits being seen by people using hemp-based products like the ones offered by Merenstein at Murray Avenue Apothecary. And, Schmitt says, the medicinal applications can be more lucrative for farmers.

“We can drastically change the quality of a person’s life,” Schmitt says. “Those suffering from epilepsy, we can virtually eliminate their seizures. It can treat young ’uns with autism, people with arthritis, back pain, neck pain, folks with PTSD, and especially veterans who have come back from the Middle East.”

In light of these perceived benefits, it might seem strange that so many have pinned their hopes on medical marijuana to cure what ails them. But Schmitt says, in light of progress in states around the country, he expects the tide to shift very soon: “I think in just a couple years, you’re going to see it in every pharmacy, every Walmart.”