But Mon-Yough Area Chamber of Commerce director Maury Burgwin feels the Mon-Fayette must come first to revitalize development in the region. His business organization covers most of the area the Mon-Fayette would serve, and he says a modern highway would attract industrial developers to the almost 1,000 acres of “shovel-ready” plots in the region.

“If you are going to put in some serious development on those sites, you need to develop those roads,” says Burgwin. “The trucking industry is growing.”

Burgwin added that Kennywood has expressed interest in expanding if the road were completed. The Turnpike Commission’s projections forecast the creation of 5,700 private-sector jobs, 19,500 jobs in relation to building the highway, and $3.86 billion in total economic impact. 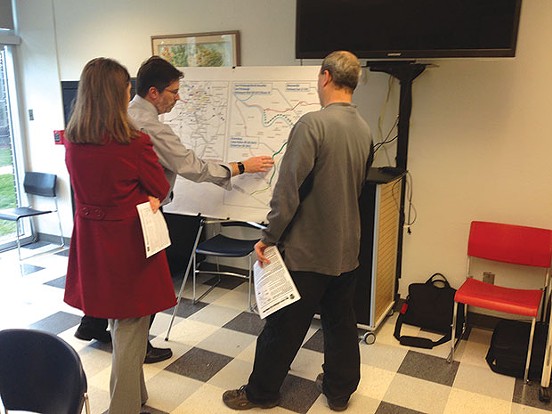 Burgwin says some developers have been intrigued by industrial sites in McKeesport, but no one has committed. He believes building out the road is necessary to attract business. But there is a long time to wait. According to the Turnpike Commission’s projections, the road wouldn’t be complete until 2036.

For Turtle Creek Mayor Kelley Kelley, this lengthy build-time will only perpetuate the decades-long promise to Mon-Valley residents. Although her town’s government has not officially come out against the project, Kelley is opposed because the road will cut through Turtle Creek’s business district; it would displace some long-time residents, and she fears the area will become a bypassed borough.

“We will simply be the town that everyone drives over,” wrote Kelley in an email to CP. “I personally feel that the threat of the expressway being built (going on 30 some years now) has actually discouraged people from moving businesses into our area, or redeveloping other parts. Why come into a town and buy or rent space that is scheduled to be demolished and not replaced?”

Turtle Creek isn’t the only town fearing a negative impact of the Mon-Fayette. Mike Boyd is a town supervisor from Wilkins Township. Wilkins supervisors recently voted 5-0 on a resolution against the Mon-Fayette.

“From the perspective of residents in Wilkins, the Mon-Fayette expressway will not add a lot of useful connectivity,” says Boyd. “We need access to the city of Pittsburgh.”

Originally, a segment was planned to connect Turtle Creek to Oakland. That plan was scrapped in 2015, due to high costs and opposition from the community. (Ironically, an area that would have been served by the canceled leg of highway, Almono in Hazelwood, is now seeing development commitments from Uber and Carnegie Mellon University, and will be Pittsburgh’s first Complete Streets-designed development.)

Boyd would like to see a commitment to alternative transit in the Mon Valley to facilitate people visiting areas like Wilkins. (Turnpike officials have floated the idea of connecting the East Busway to Turtle Creek, and then allowing buses on the Mon-Fayette, but Port Authority would have to build the busway extension and its capital funds are limited.)

And Molly Nichols, of public-transit advocacy group Pittsburghers for Public Transportation, agrees with Boyd and believes addressing current transit needs are better than the “if we build it they will come” mentality of Brewster and Burqwin.

“Our region should not spend over $2 billion on a highway, especially when there is a lack of clear evidence that we need it,” says Nichols. “There is no question we need more public transit and Complete Streets infrastructure in the Mon Valley.”

Boyd sees the Mon-Fayette as counter to Wilkins’ current bike and pedestrian friendliness since the highway would eliminate Thompson Run Road, a popular road for biking and jogging. Boyd also worries that the Mon-Fayette will increase traffic, noise and pollution in Wilkins, which sits nestled in a valley, and he can’t imagine his residents using the road, since it will only be accessible via cashless toll.

“There is necessity for better connectivity in the Mon Valley,” says Boyd, “but we should make improvements to the state roads, and make minor modifications to improve flow and accessibility. A giant toll road connecting two semi-outer communities doesn’t answer our region’s needs. We need a more holistic approach, rather than this one-off approach.”

Not all town leaders are opposed. Duquesne Mayor Phil Krivacek told WPXI in August 2016 that the expressway will exceed expectations. “It’s about the economy and building the economy. And that’s what I’m hoping for. It brings it back, so we don’t have to struggle,” Krivacek told WPXI. Fifteen towns also passed resolutions supporting the Mon-Fayette in 2014. But Boykowycz, formerly of PennFuture, is quick to point out that those resolutions passed before the Turnpike Commission eliminated the connection to Pittsburgh, which provided an alternate route around the traffic-heavy Squirrel Hill Tunnel.

Boykowycz worries the highway will just encourage sprawl that creates suburban bedroom communities, instead of spurring business growth in the Mon Valley. She believes those billions could go a long way to redeveloping Mon Valley towns with road and sidewalk improvements that modernize business districts. Boykowycz says this is the way to attract new small businesses and young residents looking for a walkable community, citing Millvale’s recent success in revitalizing its business district.

“It’s a complete and utter waste of money,” she says. “It’s not furthering or supporting a vision. It’s not congruent with current transportation priorities.”

But the zombie highway isn’t fully revived yet. The Southwestern Pennsylvania Commission still has to approve placing the project on its Transportation Improvement Program, which helps the project comply with federal guidelines. Public comments are accepted for the Mon-Fayette until March 10 and can be sent to comments@spcregion.org.