Despite Biblical influences, Pittsburgh’s Slaves BC are making noise in the blackened hardcore scene

“We’ve been playing with nihilistic, atheistic, satanic bands since the beginning.” 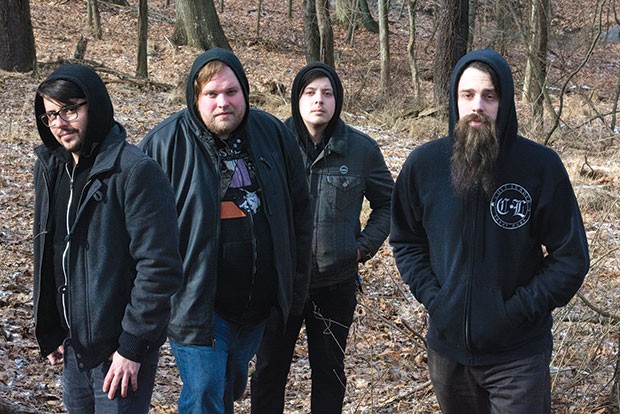 CP photo by Sarah Wilson
Light in the darkness: Slaves BC

Zao with Slaves BC, Candiri, Fit for an Autopsy

The heavy churn of Slaves BC’s new release, All Is Dust and I Am Nothing, levels everything in its vicinity. Commonly described as blackened hardcore, the Pittsburgh outfit employs slow doom riffs, coupled with the alternately plodding and uptempo drum fills typically associated with black metal. All of this sets the stage for vocalist Josh Thieler’s punishing growl.

Released in early 2016, the bleak offering was four years in the making, assembled as the band found opportunity to write and record. Intermittently, the group released a handful of split singles and EPs on Colorado’s Veritas Vinyl record label, of which Thieler is now a co-owner. That the long-in-the-making recording is so cohesive, despite the piecemeal assemblage, is no accident. It is bound by a unifying concept: The album’s inspiration is Ecclesiastes, a book from the Old Testament.

“Ecclesiastes is one of my two favorite books of the Bible. I went to school to be a youth pastor back in the day,” says Thieler, whose band will open Feb. 16 at Mr. Smalls for Zao, a metalcore band from Parkersburg, W.Va. “I kind of thought it was interesting that nobody had already done a concept album on it, especially for the darker areas of metal, just because it lends itself so much. It’s super bleak, you know?” Though the intent of the book is subject to scholarly debate, Ecclesiastes posits questions as to the purpose, or lack thereof, of life on Earth.

“Vanity of vanities! All things are vanity!” are the book’s opening lines.

Thieler’s read on the material seems to be one of positivity.

“Hey, enjoy what you can, because, no matter what you do, it’s all meaningless and nothing that you can do is going to change that,” he says. “So, I basically just took what I knew from the book, and I wrote the lyrics out without reading it again. I just wrote what I remembered to kind of capture the whole theme of the book over the course of the songs.”

The Bible is a consistent source of inspiration to Thieler because he writes from a Christian perspective. However, he explains that his take on Christianity is often at odds with what he considers to be mainstream Christianity.

“Pretty much everything we’ve done so far has kind of had that theme. We did a lot of stuff with Revelations,” he says. “Or I’ve responded to different things that are going on, like some of the super-famous preachers that twist everything up and use it for their own gain.”

Formed in 2010, the band was together about 18 months before playing a show, focusing instead on finding common musical ground. After a burst of creativity, in which they wrote about 70 songs, the group found chemistry and its crushing sound.

“It’s really funny,” he continues. “The Christian community has not been welcoming of us at all, really, but the secular community definitely has. We’ve been playing with nihilistic, atheistic, satanic bands since the beginning.” Such inclusiveness speaks volumes about the tolerance and open-mindedness of the people inside the niche Slaves BC has carved out in the metal scene.

For his part, Thieler is committed to continuing his exploration of his experience of Christianity. “The thematic direction of the band is not going to change,” he says. Material for the band’s upcoming album, due out later this year, turns on those themes, as well as Thieler’s desire to make sense of political events and personal experiences.

For example, the recent death of Thieler’s grandmother has given him occasion to explore the emotions of loss and how it affects his faith. “She was one of the people who kept me in the church, and she was one of the best people that I knew ... [who] was literally praying for me every day, on her knees. Now that person is not there,” he says. “It’s just kind of exploring what changes in my life there would be when that person’s prayers go silent.”

In the book of Ecclesiastes, wisdom is sought and won through experience, but the acquisition of such wisdom may serve no greater purpose than to find some relief in a world that may not always make sense. That, however, does not diminish the worth of the undertaking.

“Just letting it out in some way lets you just kind of put the puzzle pieces together,” Thieler says of his writing. “You can step back and view it … because you put it out there and you see the whole picture.”