Despite a second straight loss, don’t count Sammy Vasquez out of the welterweight title picture

A true fighter knows it’s the getting up that really counts. 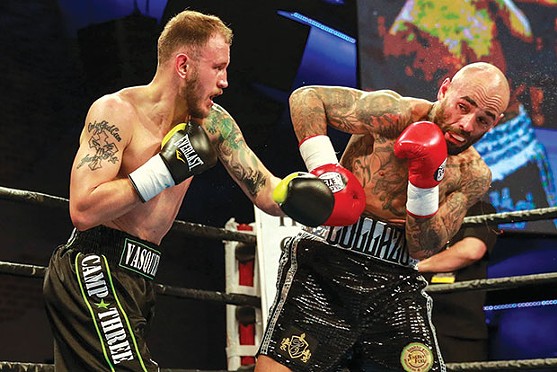 That list includes names like Paul Spadafora, Monty Meza-Clay, Verquan Kimbrough, Ed Latimore and Sammy Vasquez. But except for Spadafora, none has ever reached that plateau. (And Spadafora, although he was world champ, saw that feat eclipsed by his out-of-the-ring bad behavior.) Of those names, though, the one that I always felt would put Pittsburgh boxing back on the map was Sammy Vasquez.

City Paper profiled Monessen’s Vasquez almost two years ago, after he signed with Mike Tyson’s Iron Mike Promotions. Vasquez, a 27-year-old, left-handed welterweight, had by then stacked up 13 straight victories without a loss. And he continued to win, amassing a record of 21-0.

But last July, Vasquez lost by unanimous decision to Felix Diaz, a late substitute for his scheduled opponent, Luis Collazo. On Feb. 2, in Tunica, Miss., Vasquez finally got his shot at Collazo, a former welterweight champ. The fight was pretty tight until, in the sixth round, Collazo hit Vasquez with a short right hook to the jaw. It was one of the purest one-punch knockouts I’ve ever seen.

For a lot of fighters, two straight losses might put them on a fast track into a downhill slide. Some fighters live and die by what they do in the ring; they see a loss as the end of the world. But I don’t think that’s the case with Vasquez, a U.S. Army veteran who did two tours in Iraq. He saw a lot of dangerous situations. He knows what a life-or-death fight is. “Maybe we get a black eye or a busted nose, but at the end of the night we’re both going home,” Vasquez told CP in 2014. Based on his comments after last week’s loss, it seems that perspective is still intact.

“He just caught me with a really great shot at the right time. I knew his big punch was the right hook. I was working on keeping my hand up to block it. I dropped it at the wrong time and he got me,” Vasquez told Boxingscene.com. “Obviously this is going to set me back. I need to come back stronger.”

That’s why I still think Sammy Vasquez will get a title fight. Minutes after a tough loss, he’s extremely rational. He didn’t blame anyone but himself for the loss, and he knows that a loss or even two straight losses doesn’t mean your life is over. Sammy Vasquez isn’t just a boxer; he’s a fighter. A fighter doesn’t worry about being knocked down; they know it’s the getting up that really counts.