The animated comedy returns for a sequel – and now with more minions! 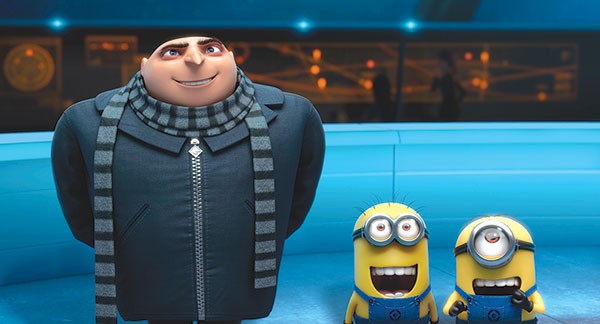 In 3-D in select theaters

The first Despicable Me, about a villain derailed by family duties, was a surprisingly fresh animated comedy. And of course, it introduced the world to the adorable, jabbering minions. Thus, it's inevitable that this sequel should feel more calculated to double down on the success of the first film, rather than break any new ground.

So we get a very slim plot: The reformed villain Gru (voice of Steve Carrell) is recruited by an anti-villain-squad agent (Kristen Wiig) to hunt down a bad guy with a potion that turns people, animals and minions into crazed, furry purple monsters. Meanwhile Gru's little girls want him to get married. It's mostly an excuse for some groovy set pieces and gadgets; jokes and sight gags galore; and minions, minions, minions. It's clear that filmmakers Pierre Coffin and Chris Renaud know which side of their marketing toast is buttered — it was the rare scene that didn't feature minions doing something cute or funny. (Minions have an ice-cream social, go to the beach, fall into a jelly machine, and so on.)

To my jaded eyes, it looked like overkill — and I groaned at the low-rent poop and fart jokes, and the wearying franticness over storytelling — but the kids at the screening went simply mad with delight for every single minion moment. The people have spoken: Just give us minions!