“It’s not about reinventing the wheel, but about perfecting staples.” 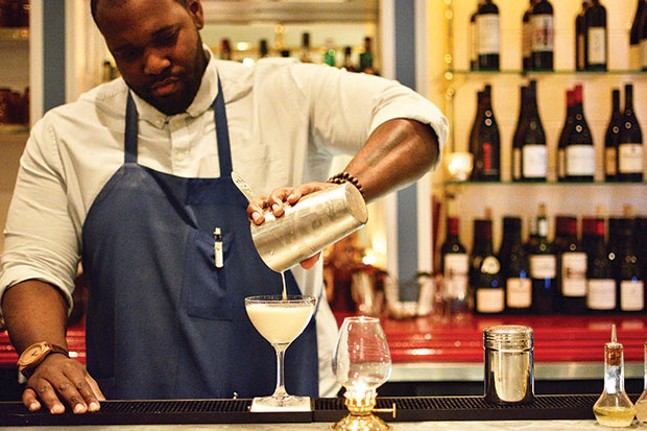 Richard DeShantz Restaurant Group’s ever-expanding empire has moved out of Downtown and up the Allegheny River to Lawrenceville. Poulet Bleu, a French-inspired American bistro, opened Feb. 6 in the space formerly occupied by Tamari and Pan on Butler Street. The new venue boasts long-time group talent, such as executive chef Dave Racicot, chef de cuisine Ryan Hart, and beverage director Cecil Usher, who has shined for six-and-a-half years behind DeShantz’s bars. Usher will move into place as Poulet Bleu’s bar manager in addition to his other duties.

Poulet Bleu brings a touch of refinement to the restaurant group’s mostly high-concept, street-styled vision. Inside, it looks like the French country home you could never afford to rent, much less own, and is beautifully decorated with copper accents, floral wallpaper and large back windows that let in light. A zinc-topped bar — that will take on character with age — welcomes guests in. A six-seat chef’s table is prominent in the dining room, dividing the open kitchen from the other tables. While it could be a good place for a quick drink, the ambience does make one feel like swiping on a little lipstick beforehand.

DeShantz’s other spots have had a beverage focus that goes along with the cuisine and vibe: Tako focuses on tequila; Pork and Beans on beer; and Butcher and the Rye on bourbon. Poulet Bleu has a robust wine program designed by John Wabeck, formerly of Spoon. The bottle list alone has over 60 wines, as well as 30 other wines served by the glass. Alsatian wines, which Usher describes as being similar to German whites done in a drier French style, fill out a unique list of offerings it would be hard to find elsewhere in the city.

The cocktail list has a distinctly classic bent, featuring the not-oft-seen Brandy Alexander and the popular, but delicate (if not by ABV, then by taste), French 75. “My vision for the menu when I was talking with Rick [DeShantz], the owner, was doing things classic,” says Usher. “We wanted to have a classic bistro. It’s not about reinventing the wheel, but about perfecting staples. I wanted the drinks to be about comfort.”

Both the wine and cocktail programs seek to mirror the food by bringing some decadence to their lists. “I based a lot of the original menu off of Harry’s New York Bar in Paris,” says Usher. The legendary bar, named for Scottish cocktail-book author, bartender and owner, Harry MacElhone, is well known in the cocktail canon as a meeting place for writers and artists in the 1920s. Usher read both of MacElhone’s cocktail books and used them as inspiration. He made the decision to make and use only gomme syrup, instead of simple syrup. Gomme syrup predates simple syrup and is made with gum arabic. It adds a velvety texture to the drink and a little dimension.