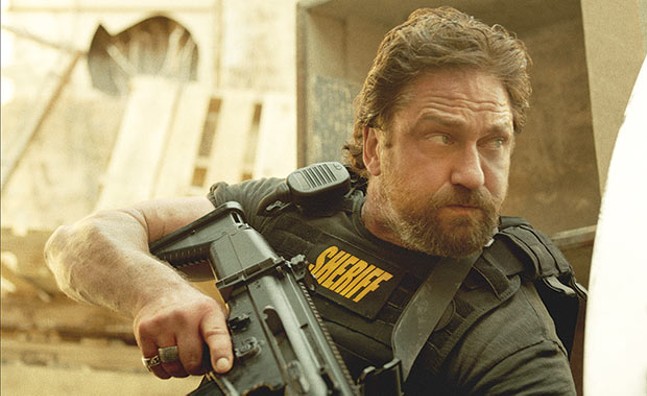 Christian Gudegast’s cops-and-robbers actioner Den of Thieves takes place in Los Angeles, which, according to a title card, is the “bank robbery capital of the world.” No surprise then when the opening scene is an armored bank van getting taken in a hail of gunfire. But wait: The van is empty!

It’s pretty easy to guess why some criminals are stealing an armored truck. It’s also obvious that the disheveled, wise-cracking crew from the Sheriffs’ Department, headed up by Big Nick (Gerard Butler), is gonna break a lot of rules to solve whatever the bad guys are up to. And if you’re paying attention, you can even spot the Giant Clue in the first reel that sets up the film’s final scenes.

Before that, gang leader Merrimen (Pablo Schreiber) lays out a plan, which will sound familiar to fans of heist movies: to hit the “bank for banks … the only bank that’s never been robbed,” or as most people call it, the Federal Reserve. It’s heavily guarded and fortified, but for the right group of never-say-die masterminds, it will be a cakewalk. Meanwhile, Nick has recruited Donnie (O’Shea Jackson Jr.), a driver for Merrimen’s gang, to act as a mole.

The takedown of the Federal Reserve is the film’s best part, as the crew deploys its various disguises, feints and trickery. It’s more entertaining than the lengthy set-up — essentially a clichéd pissing match between the two alpha males — or the never-ending, deafening gun battle that dominates the film’s back third.

As befitting Southern California, there is a racially diverse collection of cops and robbers, but this is an all-male affair: The few women barely function as second-tier plot devices. Even more hyper-masculinity is established by the gigantic cartoon-sized muscles many of the men lug around, as well as a steady stream of gay-panic jokes.

Bulked-up men firing automatic weapons at each other will always appeal to some viewers, but Den’s running time of two hours and 20 minutes is way too long. Why, you could slip out and rob a bank yourself, and still have two hours of film to get through.