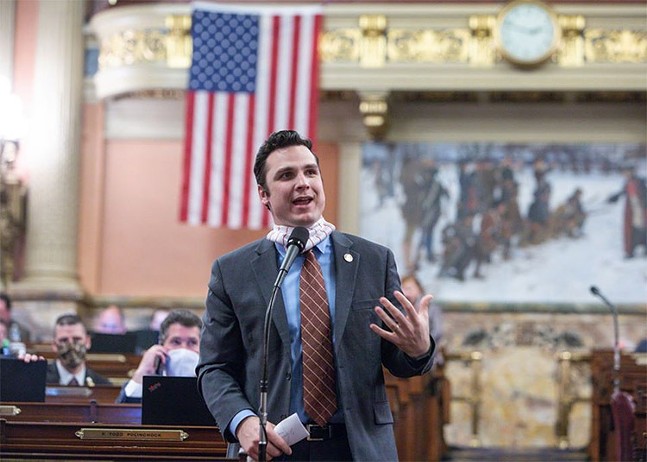 Photo posted to PA State Rep. Andrew Lewis' official Facebook page on May 14
Several Democratic state representatives are calling for the resignation of Republican leaders, including House Speaker Mike Turzai (R-Marshall), who did not inform their Democratic colleagues that Rep. Andrew Lewis (R-Dauphin) tested positive for COVID-19. Though Lewis has been quarantining at home since May 18, he was last on the House floor on May 14, not wearing a mask.

Many members of the General Assembly are working remotely, but some members of both parties have continued commuting to Harrisburg, especially those on committees involved in pandemic response planning.

On Wed., May 27, Lewis announced on his Facebook page that he had tested positive for COVID-19 on May 20 and has now recovered from his mild symptoms. He wrote that he used the CDC guidelines to determine who he may have exposed and contacted them accordingly.

"I can confirm every member or staff member who met the criteria for exposure was immediately contacted and required to self-isolate for 14 days from their date of possible exposure," wrote Lewis.

But several representatives are claiming that not a single Democratic member of the General Assembly was informed of Lewis' diagnosis, including those who work with him on a committee. And while Lewis claims he was wearing a mask when he was last on the house floor on May 14, photo evidence shows him addressing the room without a mask on.

Two other House members, Reps. Russ Diamond (R-Lebanon) and Frank Ryan (R-Lebanon) are currently in quarantine due to possible exposure to the virus via Lewis, according to the Pennsylvania Capital-Star. Footage of House meetings shows Diamond and Ryan also not wearing masks on the floor. Earlier this month, Diamond bragged about going shopping without wearing a mask, saying "so much winning."

On Wednesday, several state representatives, including Rep. Summer Lee (D-Swissvale) and Rep. Dan Frankel (D-Frankel) began posting on social media that they learned of Lewis' diagnosis only shortly before his Facebook post went public, while Republicans knew of the diagnosis one week earlier.

Today we learned from a media tip that at least 1 House Republican tested positive for Covid-19. He's been in committee and on the floor. Others we hear are self quarantining. Like their leader they refuse masks. Republicans knew for a WEEK, and not a single Dem was notified


In a statement, Frankel said that the was "horrified" to learned that his colleagues "failed to do the right thing."

"The failure of these Republican members and their leadership to follow basic safety protocols makes plain their disregard for those around them, but worse: it reveals a total abdication of their responsibility to act as leaders during this confusing time," said Frankel.

But none drew more attention to it than Rep. Brian Sims (D-Philadelphia), who went live on his Facebook page with a video in which he is outwardly furious, cursing and yelling at his colleagues for possibly putting him and others at risk. Sims revealed in the video that he donated a kidney earlier this year, which puts him at higher risk for COVID-19.

"During the entire COVID-19 crisis, the State Government Committee has been the place where all these fucked up bills to pretend that it is safe to go back to work have been going. And every single day of this crisis, the State Government Committee has met so that their members could line up one after one after one and explain that it was safe to go back to work," said Sims in the video. "Meanwhile, what we're learning is that during that time period, they were testing positive. They were notifying one another and they didn't notify us."

Lewis, Diamond, and Ryan are all on the State Government Committee, which has been meeting in person, along with Sims.

Rep. Kevin Boyle (D-Philadelphia), who is also on the State Government Committee released a letter he sent to attorney general Josh Shapiro, requesting an investigation into whether Lewis or any other House Republicans broke any laws or ethics rules.

"Without this notification, testing and contact tracing is beginning a week late - and exposed members are already potentially contagious and able to spread COVID-19 to members on the floor, family, and constituents in their districts," wrote Boyle.

Turzai did not respond to a request for comment. He has not responded to the situation on any of his social media pages. In January, he announced his plans to retire at the end of his current term.