Demolition Ax, Bill Eadie, plans to end his career where he started it, in Pittsburgh

“It’s apropos that I start here and finish here.” 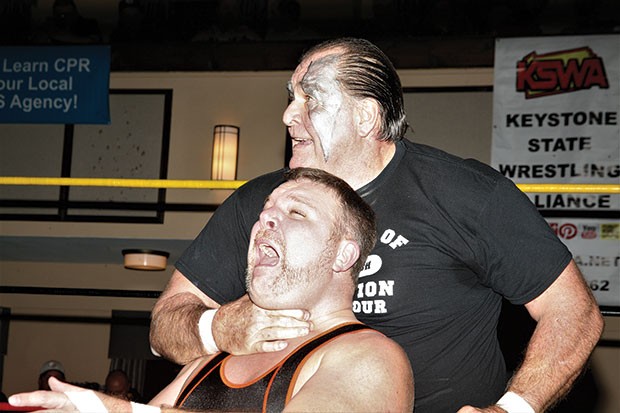 KSWA Brawl Under the Bridge

“It’s not everyone who starts their career in their hometown, and ends it there as well,” says Eadie, a Fayette County native best known as Ax from famed 1980s WWF tag team Demolition, from his current home outside Atlanta.

“My first match was in Pittsburgh [in 1972],” says Eadie, 69. “Gorilla Monsoon put me in a match at the Civic Arena when another guy didn’t show up.

“It’s apropos that I start here and finish here.”

Eadie’s first match was under the name The Paramedic on Dec. 15, 1972, one of many aliases he would have during nearly 34 years in the ring. In that match, he defeated Ron Matteucci. The two men were friends from growing up in Brownsville, Pa., and both were school teachers. Early in his career, though, Eadie mainly wrestled as Bolo Mongol, who, along with Geeto Mongol, made up the infamous “Mongols” tag team. That lasted until September 1976, when he forged fame in the Mid-Atlantic states under the name The Masked Superstar.

He would headline under that name until 1987, when he stepped into his most famous role — Ax, who along with his partner, Smash (Barry Darsow), made up the tag team Demolition in what’s currently named the WWE. The team won the company’s tag-team titles three times and the two were among the company’s most iconic superstars of that decade.

As Demolition Ax, Eadie will battle KSWA mainstay Shawn Blanchard in the match under the bridge. Blanchard has been a frequent opponent of Eadie’s. The two have battled a number of times over the years, primarily at the former Lawrenceville Moose Lodge. Eadie’s first appearance in the KSWA was at KSWA FanFest in December 2008. Eadie and Kris Kash defeated Shawn Blanchard and Lou Martin, a tag team known collectively as the VIPs. A few months later, Eadie returned for the Joe Abby Memorial Tournament and was the third inductee into the KSWA Hall of Fame, joining Pittsburgh’s Studio Wrestling legends “Killer” Joe Abby and Frank “Slip Mahoney” Durso.

It’s only fitting that Eadie end his career in KSWA, since he has been a big part of that company since 2009.

In September 2010, Eadie returned to Pittsburgh as part of the Officer Paul Sciullo Memorial Wrestling Event, in Lawrenceville. Sciullo, of Bloomfield, was one of three police officers who were ambushed and killed by a gunman in Stanton Heights in 2009. In that match, Eadie, with another wrestler, once again defeated Blanchard and Martin in tag-team competition. Just this past December — at the Teamster Temple — Eadie and Darsow once again defeated Blanchard and the VIPs at KSWA FanFest, this time in front of a crowd of more than 500.

Darsow was supposed to wrestle with Eadie in August for one last hurrah; the two decided together that they would call it quits in 2017. However, knee surgery in January has slowed Darsow down and forced him to retire just a bit earlier than he planned.

“We had been contemplating that for a year or so,” Eadie says. “I don’t like the travel, the airports.” But once Eadie gets to the show, all of his anxiety goes away.

Blanchard calls his upcoming showdown with Eadie the culmination of a “10-year feud.” (Away from the bluster of professional-wrestling promos, both men couldn’t speak more highly about their respect for one another … but you didn’t read that here.)

Looking past his retirement match, Eadie will focus on his final year as a special-education teacher for juvenile offenders in Georgia. The school’s principal announced her retirement and Eadie, her good friend, decided that it was time to end his 20-year teaching tenure at the school as well. Eadie’s wife, Sue, also plans to retire, and they plan to spend more time with their daughters, Julie and Heather, and four grandsons — Chris, Dylan, Dean and Chase. Eadie will also look for part-time work, noting, “I recently was recertified as a driving instructor.”

But just because he’s retiring from the ring doesn’t mean Eadie will disappear from the sport. Eadie says Demolition, together and individually, will continue to tour “about twice a month” for autograph sessions, comic conventions and the like.

“I really appreciate the fans,” Eadie says. “Without the fans, there is no wrestling business. There is no need for us to get into the ring.”

On July 22, they’ll get to show their appreciation one more time.

Thomas Leturgey is a wrestling journalist as well as ring announcer for the Keystone State Wrestling Alliance.

Brawl Under the Bridge brings together comics, wrestling and all things kickass.