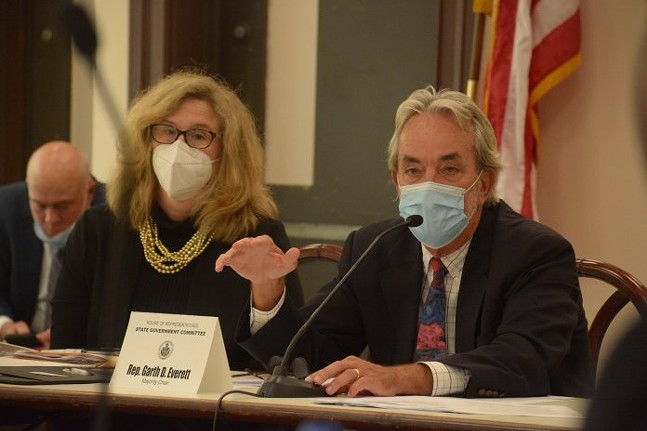 Capital-Star photo by Stephen Caruso
State Rep. Garth Everett during a committee meeting on Sept. 30.
Republicans in the Pennsylvania House sought this week to give a select committee — that they would control — subpoena power to oversee the integrity of the 2020 election.

The bill stoked concerns among Democrats that Republicans were attempting to delay results and pave the way for the GOP-controlled House to appoint its own electors who’d favor President Donald Trump.

But even before legislators left Harrisburg early because of a COVID-19 diagnosis, some Republicans were joining their colleagues across the aisle in expressing concerns about the proposal.

“It’s very hard to vote for anything that feeds into uncertainty and public concern,” state Rep. Frank Farry (R-Bucks) told the Capital-Star.

Specifically, the resolution sponsored by House State Government Committee Chairman Rep. Garth Everett (R-Lycoming) would set up a select committee made up of five lawmakers: three Republicans and two Democrats.

Everett introduced his proposal on Monday. It cleared his committee on a party-line vote Wednesday, and it was set for a floor vote on Thursday. But that swift plan for passage was derailed when state House Speaker Bryan Cutler (R-Lancaster) cancelled session because state Rep. Paul Schemel (R-Franklin) tested positive for the coronavirus.

This committee would “investigate, review and make recommendations concerning the regulation and conduct of the 2020 general election,” according to the resolution.

Among the committee’s powers would be the right to subpoena documents or compel people to appear for interviews as it sees fit.

A bill summary distributed to the panel’s Democratic lawmakers by their staff described the resolution as “laying the groundwork for a potential Presidential Election coup.”

During the committee debate, Everett even threatened to remove state Rep. Malcolm Kenyatta (D-Philadelphia) from the room over his heated comments.

“Democracies die slowly. And I think this bill would be a fatal blow to our democracy,” Kenyatta said.

Everett countered that the goal of the committee was only to see “what was good, what was bad, what we can do better” after November’s election.

But, the chairman still rejected a proposed amendment to only allow the committee to start its work after the election.

Farry argued that misinformation had fed the firestorm around Everett’s proposal, and didn’t commit to voting against it.

But, like the panel’s Democrats, Farry and other Republicans, also were looking for changes in the legislation before a final vote.

The six-term lawmaker, whose suburban Philadelphia votes Democratic at the top of the ballot, called for a clear rule that the committee can not “inhibit or change the results in any way” — including subpoenaing ballots to delay voting, counting ballots, or election result certification.

“We have a responsibility as elected officials to fight for full and fair elections, and to make sure that there’s public confidence in the process,” Farry said. “And you’re worried that, as written, that [the] resolution would create some more uncertainty and more perceived unfairness.”

Speaking Wednesday, Speaker Cutler argued the committee and its subpoena power was “the best way to continue to get information and data to collect on the voting process.”

“You have to have good data to make good decisions,” Cutler added.

He referred questions on whether could mean subpoenaing unopened ballots to Everett, the bill’s sponsor.

Everett said the state constitution would prevent the committee from subpoenaing unopened ballots, citing a guarantee that each Pennsylvanian has the right to a secret ballot.

Michael R. Dimino, a professor at Widener Commonwealth Law School in suburban Harrisburg, said that the constitutional language on secret ballots would prevent lawmakers from obtaining ballots with any names or other identifying information.

“But if they want to subpoena the ballots themselves, and the ballots don’t have any identifying marks, then I’m not sure what the problem would be,” Dimino told the Capital-Star.

In a statement, Gov. Tom Wolf (D-York) called the resolution “an unprecedented attack on non-partisan election administrators at a time when we should all be doing everything we can to instill confidence in our elections.”

Unlike normal legislation, Wolf cannot veto the resolution because it governs internal House policy. Wolf has vetoed a dozen bills this year, and has never been overridden.

House Republican spokesperson Jason Gottesman fired back Wednesday that the Democratic attacks were based on “unfounded accusations” and amounted to “dangerous left-wing conspiracy theories.”

As he’s campaigned for reelection, Trump has frequently tried to delegitimize the results of the coming general election by falsely attacking mail-in voting as fraudulent, and claiming it will aid Democrats. In fact, Trump specifically targeted Philadelphia early voting in Tuesday’s presidential debate.

According to The Atlantic magazine, Pennsylvania Republicans have also discussed having the General Assembly appoint electors if the state’s results are in doubt.

Leadership in both the House and Senate, including Cutler on Wednesday, said that there had been no discussions of such a move.

But even if it were to move in, some rank-and-file Republicans have signaled they would oppose the move.

“The popular vote will be what carries the day,” Farry told the Capital-Star. “So all this craziness about us appointing electors and all that other stuff. I know myself and many of my Republican colleagues, especially from the southeast, are not in favor of doing it.”

With the cancellation of Thursday’s session, the next scheduled House voting day is Oct. 19, which falls just 15 days before Election Day. The chamber could come back earlier at Cutler’s request.
Stephen Caruso is a reporter with the Pennsylvania Capital-Star where this story first appeared.