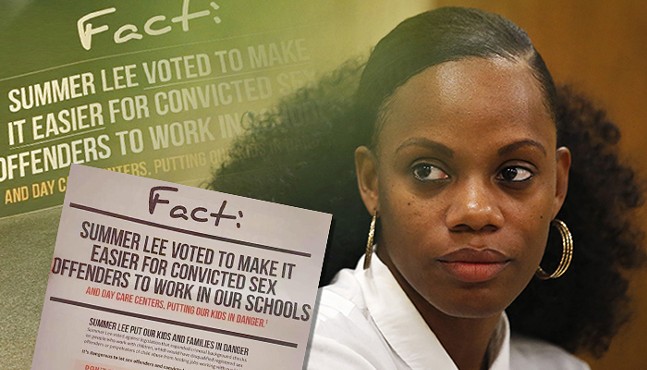 As Democrats, both Lee and Roland agree on a lot when it comes to minimum wage increases, LGBTQ rights, and supporting public education. Because of these similarities, observers might expect the campaigns to be about fracking and policing.

But Roland has gone a different direction, and it is raising the ire of some prominent Democrats.

This month, the Roland campaign has been sending mailers to Democratic voters that accuse Lee of voting “to make it easier for convicted sex offenders to work in schools, and day-care centers, putting our kids in danger.” Pittsburgh City Paper obtained screenshots of two different mailers that accuse Lee of this serious charge in bold letters.

Screenshot of mailer
State Rep. Dan Frankel (D-Squirrel Hill) voted against the bill on final passage in the House, but supported the bill on concurrence a few months later. He defended Lee and other Democrats in voting against the bill. He understands that the opposition was focused on the civil liberty aspect of the bill, and notes that the section concerning sex offenders was an amendment placed later in the process by state Sen. John Gordner (R-Columbia).

“What was being done there was an effort to make it difficult to vote against the underlying purpose for the bill,” said Frankel of the amendment added to the bill after it passed the state House. “There is always a game, but this was particularly egregious, it was not relevant to the underlying legislation.”

Additionally, nothing in the bill or the amendment mentions schools. The banning of sex offenders only applies to child day-care centers, group day-care homes, or family child-care facilities.

Rep. Austin Davis voted the same as Lee, and stands by his vote. Davis, up until recently, served as the vice chair for the Allegheny County Democratic Committee. He said Roland should offer an explanation of why he framed the vote this way in his mailers.

“Nobody in either party wants convicted sex offenders near our children,” said Davis in a statement to CP. “I’ll leave it up to the Roland campaign to explain their intention with this mail piece and I believe the voters of the 34th Legislative District deserve an explanation. I stand by my vote and believe Rep. Lee and I made the correct decision on this bill.”

Screenshot of mailer
The Roland campaign did not respond to a request for comment. According to the Pittsburgh Current, Roland’s campaign manager Darnika Reed wrote in a statement, “We take the other elected officials at their word on the reasoning as to why they opposed their legislation because their records are much different than Summer Lee’s.”

Davis and Frankel were not the only ones critical of Roland's mailers. Pennsylvania House Democratic Campaign Committee spokesperson Dena Gleason said that “the Roland campaign has completely misrepresented the bill” and that his assertion about Lee being soft on sex offenders is “incorrect.”

State Sen. Lindsey Williams told the Current that the amendment had nothing to do with the bill, which she also voted against.

“Look at my colleagues who voted against this bill. These are champions of children and education. It’s gross; it was a very dishonest mailer and it made me mad,” Williams told the Current. “To put it more clearly, it’s a lie. For him to say that Summer Lee is against children is offensive. And if he’s saying it about her, then he’s saying it about me.”

Lee told the Current that Roland’s mailers are a “blatant lie” and agreed with Frankel’s assertion that the sex offenders amendment was meant to be a strategy to hurt opponents of the bill. She called out Allegheny County Executive Rich Fitzgerald, one of the most prominent Democrats in the region, and asked if he and his supporters “stand behind these negative and disgraceful campaign tactics?”

Fitzgerald stumped for Roland in February and has been seen campaigning with him in March. The Fitzgerald campaign said they didn’t have a comment for this story when asked. Roland announced in late 2019, and according to the most recent campaign finance reports which show expenditures through December 2019, there are no donations from Rich Fitzgerald or his campaign to the Roland campaign.

Frankel, who is also finance chair for PA HDCC, said he doesn't always agree with Lee, but said she has been an articulate, thoughtful, and forceful freshman legislator.

He added that he expects to see these kinds of attacks in general elections from Republicans.

“To see this plot used in a Democratic primary against an incumbent Democrat is unfortunate and I am hoping the voters will see through that. It’s not something we should be doing internally, to ourselves.”