“Somebody had to run against him.” 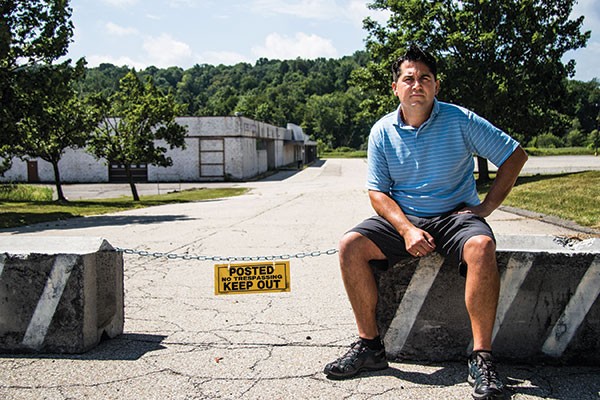 Earlier this year, North Hills resident John Craig Hammond set out on a hunt. After years of frustration with the area’s state representative, Mike Turzai, Hammond was ready to put his full support behind Turzai’s Democratic opponent in the upcoming election.

The problem, he soon learned, was that Turzai didn’t have one.

“Somebody had to run against [him],” says Hammond who launched a write-in campaign last winter to get his name on the Democratic ticket. “Part of the reason I’m running is, democracy only works when you have contested elections. This would’ve been the third straight election where Turzai would’ve gone uncontested. Understanding that 2016 was an opportunity where the Democrats had a real chance of defeating Mike Turzai because nobody was running against him, I thought I’d step forward.”

Hammond needed 300 write-in votes in the April primary to get on the ballot in November. He received 2,336.

This next part, however, will be more difficult.

Turzai is a staunch right-wing conservative who, as speaker of the house, has the power to keep legislation he doesn’t support from ever seeing the light of day. Most notably, he was a leading force in the push against medical marijuana.

Turzai was also one of the lead supporters behind Pennsylvania’s voter-ID law, which would have required voters to show identification at the polls. (The Pennsylvania Supreme Court has since struck the law down as unconstitutional.) At the Republican State Committee meeting in June 2012, Turzai touted the law as a means for getting Republican objectives accomplished, which included then-Republican nominee Mitt Romney winning the presidential election.

“We are focused on making sure that we meet our obligations that we’ve talked about for years,” said Turzai, at the time. “Voter ID, which is gonna allow Governor Romney to win the state of Pennsylvania — done.”

For his partisan obstructionism in the house and his opposition stance on social issues like LGBT rights, education funding and labor, Turzai has earned a negative reputation among progressive across the state. But defeating him has proven difficult.

As an incumbent Turzai has a lot of factors working in his favor. He represents a heavily gerrymandered district in the North Hills, which includes McCandless, Pine, Marshall, Franklin Park and Bradford Woods. And he’s also amassed an estimated $1 million in his political action committee.

To overcome those barriers Hammond will need funding. He’ll also have to energize voters against Turzai’s actions and on issues of importance to residents of the North Hills and the state as a whole. But finding those lightning-rod issues, experts say, could prove difficult.

“When we look at defeats, we’re always trying to find things that over decades we’ve been able to identify as reasons incumbents lose,” says G. Terry Madonna, political analyst and director of the Center for Politics and Public Affairs at Franklin and Marshall College. “Very few lawmakers get voted out because of their votes. It has to be something that really resonates.”

Hammond has never run for political office. As a professor at Penn State New Kensington, with a Ph.D. in history from the University of Kentucky, his background is in the history of slavery and politics.

But Hammond says his district is in dire need of new leadership.

“The whole Walmart issue,” as Hammond calls it, is one of those community-specific controversies that creates rifts between neighbors on different sides of the fence. In 2014, municipal officials approved a proposal to build a Walmart supercenter in the McCandless area. Citing increased traffic and other concerns, residents filed a lawsuit that year challenging the approval process for the proposed store. That suit has been appealed to the state Supreme Court.

This controversy has been a major fixture of Hammond’s campaign so far, and it could just be enough to energize voters.

“This is a rapidly growing district. So how do you handle that growth in this district, maintain the character of the district — what makes it a desirable place to live? And what directly feeds into that is the whole question of whether or not you should have a Walmart at that particular location.”

But it’s difficult to connect Turzai to the debate other than reports that he was supportive of the development. And that wispy connection could hurt Hammond, says political analyst Madonna. Even though micro issues like development are likely to spur voter turnout, Madonna says the connection between Turzai and the issue can’t be tenuous.

“I think he needs to find an issue with some passion and usually it’s those micro issues. Depending where Turzai stands on it and what his involvement was, you can get thrown out in a scandal; you get thrown out when you cast unpopular votes,” says Madonna. “But Turzai’s fingerprints have to be really on it. It can’t be some general statement that’s not supported by Turzai taking some direct role. And whatever he does, Turzai’s going to have plenty of money to counter it. They have their own pollsters. They’re going to know who’s going to vote and what’s motivating them.”

Turzai’s critics have done a better job of tying the speaker to statewide controversies like last year’s budget stalemate, when the state didn’t finalize a budget until nine months into the next fiscal year. He’s also been criticized for budget cuts to education under the previous governor Tom Corbett’s administration.

“He’s been there six years; he holds a powerful leadership position, and I think new leadership would be able to solve the state’s problems,” says Granville Kennedy, an employee at UPMC Presbyterian, who last month joined 50 health-care workers, parents and students outside of Turzai’s McCandless office to call for a fair state budget, funding for public schools and a $15-an-hour minimum wage.

But that June 22 event was held a few weeks before Pennsylvania lawmakers surprised many by passing a timely budget just two weeks after the end of the prior fiscal year. That took some of the ammunition away from Turzai’s critics who were hoping to capitalize on another stalemate. And the budget itself wasn’t especially controversial: It includes an increase in education funding without a general hike on sales or income taxes.

“I just don’t know what it is that would likely move voters to throw Turzai out at this point,” says Madonna. “It’s an uphill battle to accomplish, to unseat an incumbent. It’s pretty rare in politics.”

Unseating an incumbent is such a monumental feat that Madonna says 110 state house representatives up for re-election are currently running unopposed. And while Hammond has the backing of the Democratic Party, funding has been more difficult to come by. An account he set up for online campaign contribution has only received $4,040 as of press time.

“I don’t know how his campaign’s being funded. You can’t beat somebody with no money, and Turzai will have all the money he needs,” says Madonna. “The re-election rate for incumbent state house members is over 90 percent.”

Regardless of the outcome, Hammond says he hopes this election will give the voters a chance to learn about Turzai’s record and where the speaker stands on the issues: “At minimum, I wanted Mike Turzai to have to face the voters and have to answer for some of things he’s done over the past few years.”