Wearing Alvarez's No. 24 jersey is just part of his commitment 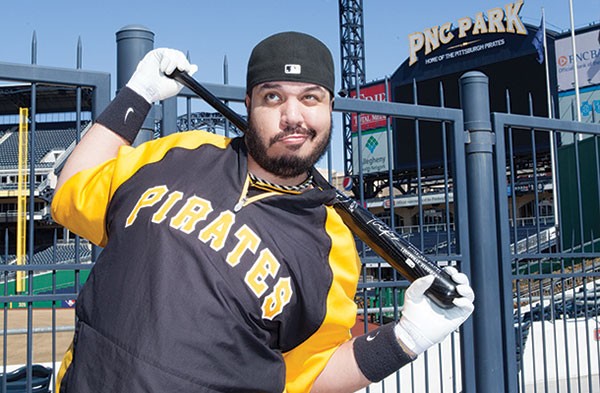 If you regularly attend Pittsburgh Pirates games or catch them on TV, you've probably seen Demitrius Thorn in the stands. You may even have recognized him on the street.

"They don't even ask my real name," he adds.

Thorn's celebrity derives from his resemblance to Real Pedro: third-baseman Pedro Alvarez, who plays just a few yards away from where Thorn holds season tickets. The similarities are all the more striking during big home games, when Thorn dons an Alvarez jersey and baseball pants. But Thorn also has a lot in common with the fans around him: a sense of loyalty that survived a two-decade losing streak, and new anticipation for 2014 kindled by last year's winning season.

"Baseball is my game," Thorn says. "And no matter what, this is my team."

Thorn's love of baseball took root when he was 12 and his mother took him to his first Pirates game at Three Rivers Stadium. Thorn says he got caught embarrassing himself on the Jumbotron "doing the Curly Shuffle," and also got hit in the leg by a foul ball off the bat of Sid Bream. (The woman who retrieved the ball gave it to a sobbing Thorn; he still has it today.)

"It was a bad day," Thorn says with a laugh. "But that's when I really fell in love with being at the ballpark."

He wouldn't attend many games in the following years, however. His father wasn't around, and his mother had health problems she didn't conquer until 2009, when Thorn took her to a Mother's Day game. The two have been ballpark regulars ever since.

Two years ago, he says, "My mom's boss told me that I could be Pedro's older brother and I said, 'Yeah, I guess.'" Thorn says he originally ordered a jersey and some pants for future use around Halloween. But then he says, he "wondered how it would go over" at PNC Park, "so I wore it to a game one day."

"The players went bananas. [Andrew McCutchen] came running over and calling other guys over, and then Pedro came out. He couldn't believe it. He laughed and gave me a ball, and that day he hit two home runs."

That was in August 2012. The next day, Thorn talked to Alvarez's wife via Twitter; she told Thorn "that was funny," and asked whether he'd do it again. Thorn obligingly wore the uniform to the next five games: Alvarez played well and the Pirates scored 20 runs over that stretch.

"I thought, 'Hey this is good luck,'" Thorn says now. "Plus, people really seemed to like it."

Thorn is predicting an 85-77 record this year. But win or lose, in the uniform or out of it, he says, "really all of this started for my mom. With or without the uniform is special, because I'm doing it with her."