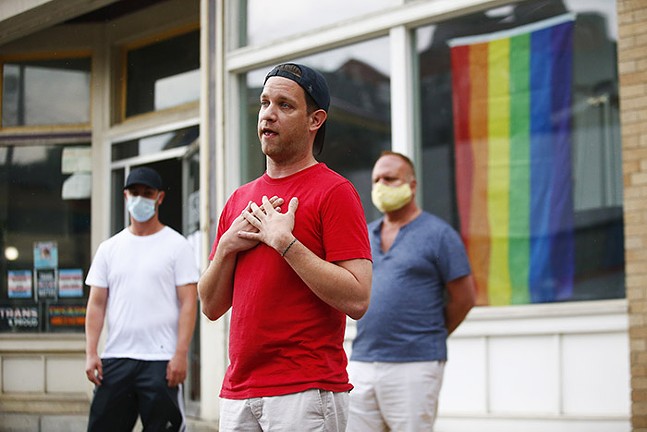 CP Photo: Jared Wickerham
Delta Foundation interim board president Jim Sheppard speaks to a group of protesters on the North Side on Tue., July 7, 2020.
UPDATE - 1:05 p.m., July 9:
In a tweet thread released today, Delta Foundation interim president Jim Sheppard announced that four board positions would be opening up at the foundation, which is Pittsburgh's largest LGBTQ group. Sheppard wrote the foundation is specifically seeking candidates who are from the trans, non-binary, lesbian, and QTPOC communities (queer and trans people of color). He wrote that the intent of this decision is to  "better serve the LGBTQ community locally, especially QTPOC."


Members of the LGBTQ Community of Pittsburgh:

In order for the Delta Foundation to better serve the LGBTQ community locally, especially QTPOC, transgender and non-binary communitues, we are announcing that 4 Board seats are declared open for community nominations. 1/10

Sheppard announced Delta is also creating a Youth Community Advisory Committee, with the intent to "guide us in the planning & execution of events including Pride to ensure that all events are inclusive and diverse and provide a safe space for everyone in our community."

Nominations will be accepted until Aug. 10. Nominations can be submitted at pittsburghpride.org/board-nominations.

Original story published July 7:
In the last several years, there has been considerable conflict between some of Pittsburgh's LGBTQ organizations, particularly over the region's Pride celebrations. Some groups, like Roots Pride, criticized the Delta Foundation for not being inclusive enough of LGBTQ people of color, especially the trans community, as well as corporate sponsorship of Pride from companies that also donate to anti-LGBTQ politicians. Delta runs the Pittsburgh Pride Equality March, the city's largest Pride celebration.

This has led to a formation of alternative Pride celebrations — which, in 2019, even became a segment on The Daily Show — and a fractured LGBTQ community. 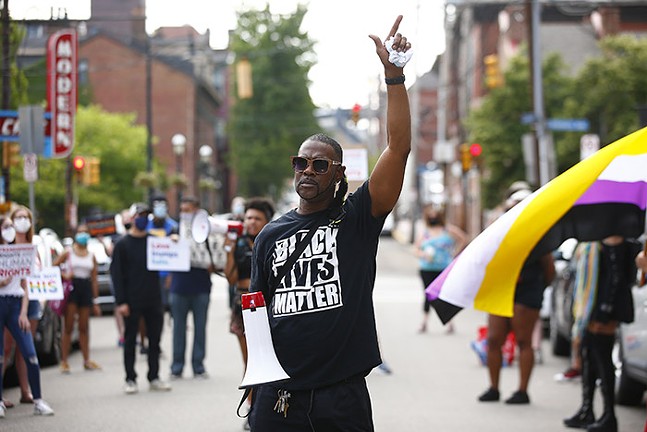 CP Photo: Jared Wickerham
Protesters stand outside of the Delta Foundation offices on the North Side.
Today, a group of protesters marched to the Delta Foundation offices in the North Side, and gave speeches to Delta board members and employees about what they want to see out of Delta, the region's largest LGBTQ organization. They called on Delta to be more inclusive of non-binary people and to use their influence and resources to help provide resources to people in the trans community. The march was organized by Pgh LGBTQ+ Coalition and Trans YOUniting.


Delta Foundation interim board president, @jimsheppard, answers protest organizers for what he’s learned and what they will do for/with the LGBTQ+ community going forward: @PGHCityPaper pic.twitter.com/WmPG6n2MLz

Delta interim board president Jim Sheppard listened to the protesters and eventually gave a speech acknowledging that Delta has failed on issues of inclusivity.

Sheppard said there were promises made to organizations in the past, before he became interim president. He asked the protesters to let him know what those promises were, and he vowed to "do everything that [he] can as the current president of Delta to make it better for you."

"I am incredibly sorry that we have failed the community, especially the trans community of color in the past," said Sheppard, whose Twitter profile says Black Trans Lives Matter. "But we will be better because I demand it, and you demand it."

CP Photo: Jared Wickerham
Delta Foundation interim board president Jim Sheppard speaks to the group of protesters including LGBTQ+ Coalition and Trans YOUniting outside of the Delta Foundation offices.
Earlier this year, former Delta president Gary Van Horn resigned. A month before he resigned, he was charged with impersonating a police officer. Sheppard told WESA earlier this year that the Delta board "felt that in the best interest of the foundation and of Pittsburgh Pride to have a complete separation from Mr. Van Horn.” In a statement following Van Horn's resignation, Sheppard said that decision would allow "new leadership to guide Delta into the next decade."

After Sheppard's speech, the protest dispersed instead of continuing the planned march Downtown. Organizers said they were cutting the march short because they felt the demonstration had accomplished its goals.