Delivery robots have descended upon Bloomfield 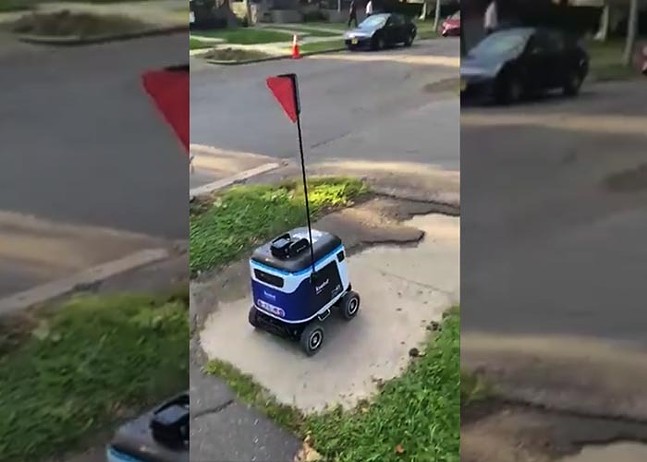 According to the Pittsburgh Business Times, Kiwibot launched a six-month pilot in June with one or two robots, with plans to increase the number of robots. The robots appear relatively small, about two feet tall, are semi-autonomous, and can detect people, traffic lights, vehicles, and other obstacles on their own, according to the Business Times. Additionally, a human operator can remotely control each bot within a 1.5-mile radius of established operations monitors.

"We have been (in Pittsburgh) for quite some time," Kiwibot's COO Diego Varela told the Business Times. Varela added that Kiwibot has been asking Bloomfield-area businesses if they would be interested in partnering with the company for delivery desires. "We have done a number of, in terms of mapping the city, mapping the area where we're going to operate. We have been working with the city for quite a few weeks now, and the idea is that we're finalizing plans to start some of the local commerce delivery plans."

Autonomous delivery robots were legalized in Pennsylvania in November 2020. State law technically classifies them as pedestrians, which gives them the ability to travel on sidewalks. Pennsylvania’s Personal Delivery Device (PDD) law is arguably one of the least restrictive in America. PDDs in the state can weigh up to 550 pounds and move up to 12 mph.


OMG, what do I do? Do get out of the way or what? pic.twitter.com/sA67ksS6cO

According to a video posted by University of Pittsburgh economist Chris Briem, it appears the Kiwibots are much smaller than the 550-pound limit and are traveling much slower than 12 mph. The robots taken in Briem’s video were traveling up Winebiddle Street in Bloomfield towards Penn Avenue.

Even so, autonomous delivery robots have not come without some opposition. The state’s PDD bill was passed mostly with Republican support and many Democrats opposed the bill as a job killer. At a community meeting in April, Bloomfield residents raised concerns about the robots, ranging from lost jobs to robots sustaining potential damage on poorly maintained sidewalks.

According to the Pittsburgh Post-Gazette, a city official said in April that Kiwibot has agreed to take on all liability for damaged devices during the pilot program.