"I think we made some mistakes." 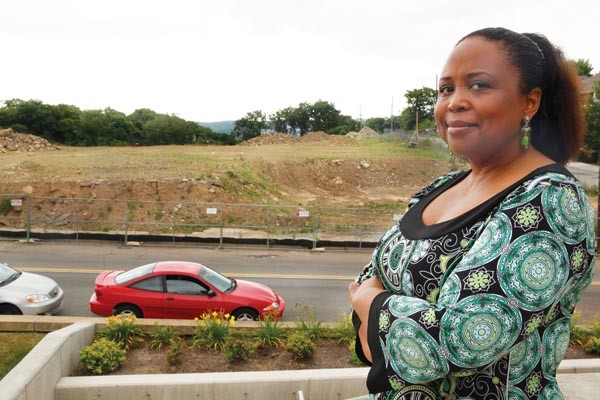 Photo by Heather Mull
Cheryl Hall-Russell, CEO of the Hill House, hopes to soon see a grocery store going up on Centre Avenue.

Before turning the microphone at his church over to Rep. Jake Wheatley and officials from the Hill House Association earlier this month, Rev. Glenn Grayson cautioned the more than 100 people demanding an update on the Hill District's grocery-store project that yelling wouldn't get it done any faster.

"We know we need a grocery store," he says. "We cannot afford to argue and bicker and fight and bring each other down."

To simply say Hill District residents are frustrated at the lack of work on the promised Shop 'n Save grocery store doesn't capture the longing for brick-and-mortar, nor the angst over the many fits and starts of the community-owned project.

"There's a core feeling in this community that this project is being made to be more complicated than it needs to be," says Cheryl Hall-Russell, who became president and CEO of the Hill House in September 2011, five months after the organization's development arm — the Hill House Economic Development Corporation — broke ground.

Originally from Indianapolis where she served most recently as CEO of the Indiana Youth Services Association, Hall-Russell has spent the last few months cleaning house and re-launching the project.

The store is the first in the neighborhood since the Phoenix Hills Shopping Center's Shop 'n Save closed in the 1980s. The one set to take its place will be a unique partnership, co-owned by the Hill House and a private operator with some of the profits returning to fund Hill House programs.

Hall-Russell said it's become a rhythm and a habit to talk about why it's not going to work.

"There's no one person they're blaming for it, but there seems to be this thought process that they — ‘they' — don't want us to have a store," she says. "They tell me that ‘you're going to discover that ‘they're' going to put barriers in your way. We believe in you, but don't underestimate ‘their' power to stop this from happening.'"

Seeded with $2 million following the 2008 signing of a community-benefits agreement between Hill District residents, government officials and the Pittsburgh Penguins, the grocery store is intended to be a key piece of revitalization plans.

But after four years, only the site-development work has been completed on the land at Centre Avenue and Heldman Street. A store operator initially proved hard to come by, and then the original contractor was replaced last fall, causing the promised Thanksgiving 2011 opening date to be pushed back.

Earlier this year, a lawsuit by a former Hill House employee was filed, alleging that part of the $7.7 million in grants and loans committed to the Hill House's portion of the costs of the project had been misspent. Then in March came news from Hall-Russell that the original project estimate may be about $2 million less than what is actually needed.

Facing the roomful of Hill District residents who turned out June 7 at the Wesley Center AME Zion Church to give her an earful, Hall-Russell addressed the issue first.

"I was honest," she told them. "We have enough money for the base building and five feet around it. We don't have the rest."

The project so far has cost $3,244,840, which accounts for about 42 percent of the original committed funds, according to a breakdown provided by Robert Farmer, a consultant with Sphinx Group Inc. that the Hill House hired to help manage the project.

Hall-Russell says an audit of the project's financials by Pittsburgh-based CPA firm, Sisterson & Co., showed no evidence of illegal expenditures. Hall-Russell declined, however, to provide City Paper with a copy of the report.

"They went through and they found nothing," she says. "Does it say we worked smartly? Not necessarily. But we most assuredly were not criminal in it."

At this point, the project's funders, which include state and local agencies, the Penguins, the McCune Foundation, the Heinz Endowments, the Richard King Mellon Foundation and Pittsburgh Partnership for Neighborhood Development, have stopped spending until a plan is put in place for the rest of the project and the exact amount of the funding shortfall is calculated, Hall-Russell says.

Final numbers from the contractor are expected within the next few weeks.

She adds: "My job is to eliminate all excuses for why this can't happen and deliver a store."

Larry Brinker Sr., CEO of the Brinker Group, the contractor initially hired to build the store, says the funding shortfall became obvious when he started getting quotes from subcontractors on the 36,410-square-foot shopping center to be known as the Centre Heldman Plaza, which includes the 29,500-square-foot grocery store.

"Like with most projects, you can have a budget, but when you go out into the street to price it with subcontractors, that's when you get reality," he says.

Julie Matthews, then-executive director of the HHEDC and her husband, Jason Matthews, who worked as the project manager, immediately began what Brinker calls a "value engineering process."

"The approach was pretty much to take the documents... and see where the dollars could be saved."

One plan was to dial back the exterior designs of the store, a fact that Jeff Ross, the chosen co-owner and operator of the Shop 'n Save says he was surprised to discover.

"When I first sat down with Cheryl and we looked at the project, it was nothing close to what we had agreed to a year prior," he says. "The finished project kind of looked like a bunker on the hill."

Another cost-cutting plan involved hiring a different contractor.  In September 2011, the second phase of the project was bid again and the job was awarded to Wexford-based CMI Contracting.

Julie Matthews told CP at the time that although pleased with the work Brinker Group was doing, "a lot of it comes down to [our] very finite budget."

A phone message left at CMI Contracting's office was not returned.

When asked how he thought the new contractor was able to do the project at a cheaper price, Brinker replied, "I don't think that they were. There's no building up."

Hall-Russell says she spent a few months observing and examining the project, trying to connect the dots of what happened. In the end, she says "when you don't have all of your ducks in a row, you're bound to have disappointment. I think we made some mistakes."

Hall-Russell says she was told initially, like everyone else, that the project was fully funded. "And then we'd sit down and look at the financials on it, and there was a couple hundred thousand here and then there was four and then eight," she says explaining how she saw a growing deficit.

"There was some partial pricing out of things that was becoming problematic." Items like a parking lot as well as lights and equipment for the interior of the store were never fully figured into the original cost.

Hall-Russell says the original management team realized the project was under-funded "but they weren't really communicating that with the funders to the level I thought was appropriate."

In February, the Hill House executive committee fired Julie Matthews, who had served as executive director of the HHEDC since 2009. Her husband, Jason, and CMI were also ousted from the project.

In March, Hall-Russell announced that Farmer would serve as the HHEDC-based project administrator. CM Solutions was hired as the new project manager and Pittsburgh-based Massaro Corporation as the new contractor. The project has been largely on hold since September, with CMI completing this spring the last of the site-development work, which was left unfinished in the fall following the first contractor switch.

"We stopped to make sure we weren't going to have any more surprises," Hall-Russell says.

While he originally agreed to answer questions in writing, Jason Matthews never responded about his role in the project and the funding shortfall.

In April, Julie Matthews filed a civil lawsuit against the Hill House and HHEDC in Allegheny County Court of Common Pleas, alleging that she was fired for reporting to Hill House officials that creative accounting measures were being used to hide running deficits and exorbitant expenditures on items such as legal fees.

According to court records, she says she was fired shortly before she was to make a presentation to the Hill House board about the irregularities and is seeking protection under Pennsylvania's whistle-blower law. But Hall-Russell says the audit by Sisterson clears the nonprofit of any wrongdoing.

Funders of the project say they are confident that funds were not misspent.

"I don't think [funds were] illegally spent," says Ellen Kight, president of the Pittsburgh Partnership for Neighborhood Development. "I think it was poor project management."

Of the $1 million state grant given by The Reinvestment Fund, $850,000 has been spent so far. Patricia Smith, senior policy adviser with the fund, says expenses were documented and she has no reason to believe it was spent inappropriately.

Two phone messages left for Julie Matthews through the number listed for her most recent employer according to her Linkedin profile, W. Blazer Holdings, and through her husband were not returned. Her attorney, Sam Cordes, is out of the country this week and was not available for comment.

Hall-Russell says she thinks the overall store is still a good one. She's worked with Ross to restore the exterior designs, and says she believes the funding gap can be closed. The Hill House has applied for two separate $800,000 grants that officials are hopeful will help. But still, cautions Kight, "It's not going to be easy to raise that close to $2 million."

Wheatley, who helped secure some of the startup funding, said he's committed to helping see it through.

"It's something we've all invested heavily in. I can't see, unless this number becomes so large, how we wouldn't find the money to do it."

Despite the funding gap, Ross of Shop 'N Save says the project finally feels like it's heading in the right direction.

"I feel more confident now than I have in the past two years," he says.