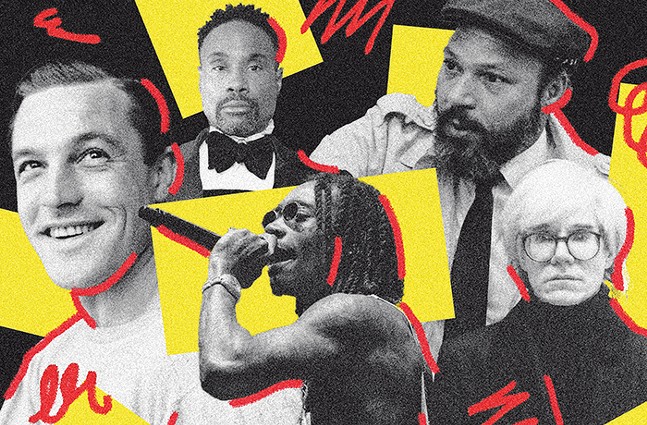 CP Photo Illustration: Lucy Chen
I’m sitting in the lobby of the hotel where I had my high school senior prom. Teenaged me: pink silk dress with an ivory sash. Adult me: dark semi-professional-looking outfit with a little homemade bling, ready for my meeting with a major foundation. Both versions of me: excited, anticipatory, hopeful.

This time, my hope in returning to the Omni William Penn Hotel wasn’t for a night to remember but the hopes of a dream coming true. I was about to meet with a program officer of a Pittsburgh-based foundation. Maybe I could get some funding for my work? I was so thrilled.

After going through the summary of my work to date (fashion presentations in Paris, Nairobi, New York, and Pittsburgh; work with Indigenous artisans in Kenya and New York), I was still smiling, still hopeful. Until the moment when, instead of being told my local-global design work was innovative, I was told the foundation could not support my work because I was not a “real Pittsburgh artist.”

My mind started drifting and I imagined my 17-year-old self walking through the lobby in her pink prom dress, masterfully not tripping on the long ivory sash, unlike the way I now found myself tripping over my words.

In this vision, my happy younger self paused as she caught the eye of my frowning and confused 40-something self. She spoke to me, “T, you need to just get up and leave, sis. Just say thank you and walk away.” At which point, I nodded slowly — not in agreement, but in disbelief — and left. Was I seriously just rejected because I wasn't a “real Pittsburgh artist”?

A few years after this event took place, I joined a group dedicated to supporting local craftspeople, funded by that same foundation, and I received some money, albeit at a much lower level than if I had been supported individually. But it felt less like a vindication and more like one extra gate, one extra white gatekeeping barrier towards support and resources. Though I eventually got support through my own crowdfunding efforts and other foundations, I wonder what would have happened if I had been able to get that early funding? I will never know.

Now, as Pittsburgh finds itself with higher artistic representation nationally, “Who is a Pittsburgh artist?” is asked more often, especially when checks are being cut. For me, there are no borders to Pittsburgh creativity and no timeline that can take the title away from a local artist regardless of where they were born, where they reside, or create.

Billy Strayhorn could write about “Takin’ the A Train” because that brother was living in Harlem. Highland Park-born Gene Kelly was in Hollywood, as was Lena Horne, who spent some of her teens in Pittsburgh. Much copied Jean-Michel Basquiat was greatly inspired by Pittsburgh-born and raised Raymond Saunders, which begs the question: Who’s zoomin’ who?

Somewhere, someone is presenting a Pittsburgh-born August Wilson play, even though the playwright spent much of his life in St Paul and Seattle. Andy Warhol famously left Pittsburgh and made NYC the center of his creative factory. Wiz Khalifah isn’t based in Pittsburgh but when he performs here, it is a homecoming. Years before Kinky Boots changed everything, I had the great fortune of running into Billy Porter in Times Square where we chatted a bit about our time together at Allderdice High School.

I also believe anyone who comes here to create should be welcomed to the city. Philadelphia-born, Pittsburgh-based Shikeith photographed Lil Nas X for The New York Times, among other honors. Amani Lewis, a Baltimore-based artist and one of today’s hottest painters in the country, had their first solo exhibition in Pittsburgh at the August Wilson African American Cultural Center and regularly returns to show or support artists in the region.

All of these artists bring something to Pittsburgh, share something with Pittsburgh, and take part of Pittsburgh with them to share with the world. They become part of our creative community, the neighborhood of artists shaped by the region.

I, for one, won’t be checking for birth certificates, passport stamps, or evidence of their time in the region to determine who is welcome to create in our city. And I will continue to take my hometown with me wherever I go — whether it is Downtown Pittsburgh or Dakar, Lawrenceville or London.

If the goal of that program officer in telling me I wasn't a Pittsburgh artist was to shrink what I create or how I look at myself, it failed. Pittsburgh creatives are local, regional, national, global, heck, even intergalactic. I think back to my younger, smiling self and owe it to her to keep moving forward, knowing her advice to "Just go!” meant to just keep making and that no borders should ever be placed around our creativity.