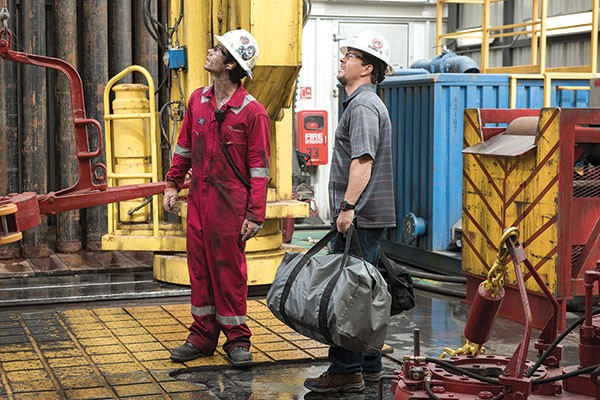 The three-month oil spill that followed the 2010 blow-out at the Deepwater Horizon rig in the Gulf of Mexico became such a huge news story that folks might have forgotten what horrific industrial accident precipitated it; 11 workers died, and the 100-odd other employees were lucky to survive. Peter Berg’s docudrama recounts that fateful day and night on board the mobile offshore drilling unit from the perspective of the workers.

One of the engineers (Mark Wahlberg) is our primary guide. He leaves his family for the trip to the rig, 41 miles out at sea. He and his superior (Kurt Russell) spar with BP guys over project delays and safety checks not done. Berg crafts a story that hits the expected beats: ominous build-up (we get many shots of the ocean floor bubbling), dismissive corporate bean-counters, plucky survivors, on-the-job Coast Guarders, nail-biting escapes and worried wives back on land.

But the special-effects crew does a great job, and virtual time spent aboard the post-blow-out rig is pretty nerve-wracking: Dangers include high-velocity oily mud, poisonous gases, fire, drowning, flying debris and the sea being on fire. The film suggests but doesn’t go deep into the tangle of subcontractors and accountability that complicated the situation before, during and after the explosion. But internecine politics are pretty moot when your workplace blows up in the middle of the ocean.