Despite recent adversity, Garfield Farm's bioshelter has cause to celebrate 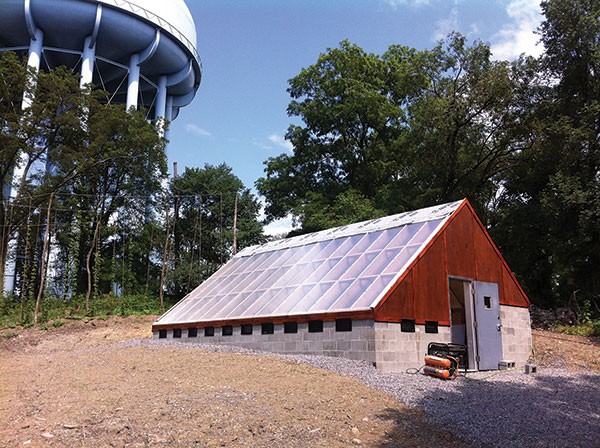 On Thursday, with a potluck, a prayer and live music, volunteers at Garfield Community Farm will dedicate the bioshelter that has been more than two years in the making.

The party will be a moment of fun after what has been a rough few months, as the farm has struggled with several acts of vandalism.

First, four of the farm's chickens were killed — three one day, the fourth the day after. Fearing that the killings would continue, the farm's volunteers found other homes for the remaining chickens and rabbits.

Then the work shed was broken into. Tools were stolen. A small fire was set inside.

And most recently, as volunteers watched, several teenagers walked onto the farm, grabbed two backpacks and ran.

"I ran after them," says the farm's director, John Creasy, adding that he was able to stop one, who was later taken into police custody.

Police are investigating the other incidents as well.  In the meantime, Creasy, who is also associate pastor at The Open Door church, says he is talking to the teen and his family "trying to engage [him] in a positive way."

"The break-ins and the damage to the farm have really put a lot of stress on the farm," Creasy says. "But there is so much good happening, we're trying to focus on that."

Thursday's party is one example. Construction began in February on the bioshelter, a greenhouse containing its own ecosystem, after receiving the stamp of approval from the city zoning office in January.

"We don't have anything growing in it yet, but the structure is finished," Creasy says.

All are welcome to join the volunteers at the farm Thu., July 11, as they celebrate the completed work with food and music from the band Walking Roots. The farm is located at the intersection of Cornwall and Wicklow streets in Garfield; festivities start at 5:30 p.m.

"People can come by, bring a dish, something small to share," Creasy says. "We'll do tours of the farm if people are there for the first time."