Songs of the Big-Band Era 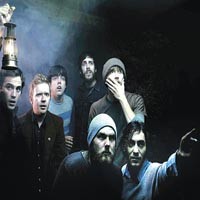 A lot of writers seem to want to throw the "alt country" tag on Decibully's records. One magazine goes so far as to suggest that the music on Sing Out America! somehow sounds like Wilco of an AM vintage when, if anything, it sounds more like the kind of records Wilco started making after ditching that whole genre for the artier terrain of Yankee Hotel Foxtrot.

Hell, one of the record's highlights is a moody Ian-Curtis-meets-The-Beach-Boys a cappella number.

As Decibully's William J. Seidel -- who you certainly couldn't accuse of affecting a country twang -- explains it, when City of Festivals came out in 2003, "it wasn't straight-up indie rock and we were doing lap steels and banjos and mandolins, stuff like that. So the label thought it would probably be a better idea for them to say 'This is kind of alt country-ish.'"

Then, with a laugh, he adds, "With the big emphasis on ish."That emphasis on ish is even more pronounced in the music on Sing Out America!: Its melancholy pop songs share little more with country than traditional instrumentation. And even then, as Seidel says, those instruments are being played by "people who have never played straight-up country, which adds a whole different element. It's like you don't call a garage-rock band with a sitar 'alt Indian' music."

When Seidel put the group together in 2001, it began as a two-piece, but kept growing.

"By our third show," Seidel recalls, "we were a six-piece. By our fifth show, a 10-piece. We were just kind of picking up people -- whoever was free and wanted to do it. Some just did it for the free beer."

At this point, the core band is six members, each playing a number of different instruments, but sometimes standing silently on stage until it's their time to contribute.

"Just picking up a maraca can change the whole dynamic of a song. It takes a while to get people used to the idea that you just play tambourine or maraca on this song. And only in this one part," Seidel explains. "But that really kind of adds an element that otherwise you'd miss. That's why we always had that idea of a big band. The more people, the more stuff we can do and the simpler everything can be, but the grander it can sound."