Decelerating Learning Academies: Once the foundation of education reform, accelerated schools may be closed by city

If ALAs are the greatest thing since sliced bread, why get rid of them?" 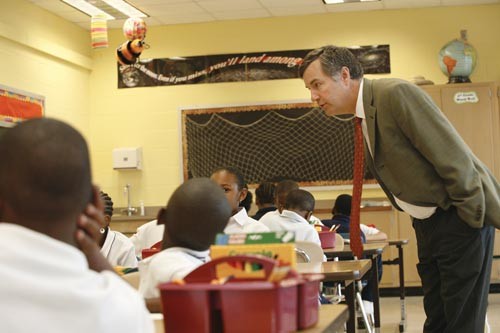 William Boston says he's aware that Pittsburgh is home to a number of quality public schools. He just doesn't think his second-grade daughter attends one of them.

Waiting to pick up his daughter outside Murray PreK-8, one of the district's Accelerated Learning Academies, he says, "I don't think it's a good school."

The very fact that Boston was picking up his daughter from class on Aug. 24 -- nearly two weeks before most other Pittsburgh city schools open their doors -- is supposed to set Murray apart. With a focus on improving academic achievement for struggling students, ALAs differ from traditional schools in a variety of ways -- including longer school days and school years. But Boston is unimpressed.

"It's supposed to be an ‘accelerated' school, but I don't see it," he says.

Fred Gee, by contrast, thinks highly of Fort Pitt PreK-5, the ALA his two daughters attend in Garfield. "Accelerated classes are really good," Gee says, noting that both girls have improved academically since enrolling there.

Such differing perspectives are not unusual: Opinion about ALAs has been divided since eight such schools were launched in 2006. But Boston and Gee have at least one thing in common: Under a new school-closing plan, their children's schools will both be shuttered next year.

In August, Superintendent Linda Lane announced the district's plan to close seven city schools at the end of the 2011-2012 school year. Those cuts would save $8 million annually, money needed to close a projected $68 million deficit. Of the seven schools slated for closure, three are ALAs: Fort Pitt, Murray and Northview PreK-8, in Northview Heights. The school board votes on that plan later this year. If the plan is approved, only four ALAs will remain. (Rooney 6-8, an ALA in Brighton Heights, closed last year.)

That would be a major setback for the ALA concept, which was a keystone of former Superintendent Mark Roosevelt's sweeping reform agenda.

Officials stress that the closures don't prove the failure of the ALA approach. But some observers say the program hasn't delivered on its promises, and wonder whether the district is winding it down.

"The jury is still out" on ALAs, says Will Thompkins, a North Side education advocate who works as a community-outreach director for The Pittsburgh Project. But "If ALAs are the greatest thing since sliced bread, why get rid of them?"

ALAs were among the first initiatives of Roosevelt's effort to turn around city schools. Roosevelt selected the eight schools that fared the worst on state tests, and converted them into ALAs. There, additional resources were deployed to accelerate the learning curve of struggling students.

Originally, students in ALAs had a school year 10 days longer than their peers; their school day was longer as well, by 45 minutes. The ALA curriculum was also different: It stressed discipline and structure, with a focus on classroom routine.

Expectations were high, and parents were promised significant learning gains.

To some extent, the schools delivered -- even in the three buildings slated for closure.

State test results show an overall improvement at each of the schools. While performance has fluctuated from year to year, some learning gains have been significant.

ALA test scores still lag behind district averages, but officials note that the schools, most of which are located in disadvantaged neighborhoods, house the district's most academically challenged students.

"[The ALAs] are lower-performing, but higher-growing," says Jeannine French, the district's chief of school performance. "We've seen a steady increase [in ALA test scores] since 2007."

Indeed, according to district stats, just 36.4 percent of all ALA students scored proficient or better on PSSA reading exams in 2007. By 2011, that percentage had jumped to 51 percent. In math, the percentage of ALA students scoring at least proficient increased from 45.1 percent in 2007 to 61.5 percent last spring.

"My understanding is that [the ALAs] are doing well," says Roosevelt, who spoke with City Paper via phone from Ohio's Antioch College, where he is now president. "The best way to judge them is, are they improving?"

"The [ALA's] rate of growth has shown that something is working," adds Sharene Shealey, a school-board member and parent of two girls who attend Colfax K-8, an ALA in Squirrel Hill. "I can't say they were a waste or unsuccessful."

So if ALA's are working, why are their numbers being cut in half?

"Doesn't that kind of tell you the [ALAs] are over?" asks Randall Taylor, a former school-board member who backed the ALA concept but over time became a Roosevelt critic. "They're not creating more of them."

Roosevelt says he was saddened to hear that the district is planning to close three ALAs: Originally, he'd hoped to expand the model if it proved successful. But he says he understands why the district is heading in the opposite direction.

For one thing, Roosevelt says, "These were expensive schools," partly because of the ALAs' longer school year. Speaking more generally, he notes that the district as a whole is under pressure to make cuts, since Gov. Tom Corbett slashed nearly $1 billion from the state's education budget. "The problem is finances," says Roosevelt.

District officials say enrollment declines played a major part in the decision to shutter the three ALAs. The loss of students, they say, stems from the city's demolition of nearby public-housing projects. Enrollment at Fort Pitt has dropped 44 percent since 2007; in Murray, the decline has been 35 percent; and 29 percent at Northview.

But some say the ALAs had problems of their own.

Tammie Cuccaro, for one, says she was excited about sending her two nieces to Murray when it opened in 2006. But after three disappointing years at the school, she says, "I had to transfer them out."

Despite the ALA emphasis on discipline, she says, teachers had a hard time controlling the classroom. As a result, "My kids couldn't learn ... We don't care if that school is shut down."

According to testing data, Cuccaro's nieces weren't alone in struggling at Murray. Scores at a given grade level might improve from one year to the next, but by then, the students themselves had moved on to the next grade. And not all of them showed improvement.

Similar trends can be seen at Northview and Fort Pitt.

And while the ALAs stressed rules and structure, the creation of the schools was chaotic. As CP reported in 2007, ALA courses relied on programs devised by four different contractors, resulting in confusion among teachers and administrators.

Nor did educators seem to warm up to ALAs. In 2009, the Pittsburgh Post-Gazette reported that roughly one-third of ALA teachers and other professionals had "resigned, retired or transferred" -- even though the district sought to maintain a consistent staff for at least three years.

According to Nina Esposito-Visgitis, the new president of the Pittsburgh Federation of Teachers, ALAs suffered from a lack of teacher input. The heavy turnover, she says, had a lot to do with "burdensome, redundant paperwork" required at the schools.

Educators and parents alike, meanwhile, complained about the longer school year. In 2009, the district shortened the ALA school day by 16 minutes, and its school year by two days.

And ALAs have yet to catch up with other schools in the district.

"The dramatic improvement that was promised to us did not occur," says Richard Flanagan, youth-development director at the Bloomfield-Garfield Corp., located near Fort Pitt.

"Performance-wise," adds Mark Fatla, executive director of the Northside Leadership Conference, "Northview was having some difficulties." As a result, he says, the school "didn't have a reputation to attract students outside its feeder pattern."

"Data shows that the actual gains at the ALAs were very minimal and sometimes non-existent," says Kathy Fine, of PURE Reform, a local advocacy group that has long been critical of Roosevelt's initiatives. "They've been failing since the start."

Although not everyone judges the program so harshly, even defenders concede disappointment.

"I don't think the results were as good as we hoped they would be," says board member Jean Fink. "We've seen some improvement, but it's never as much as you want it to be."