It is a natural, though often unhealthy, instinct to avoid talking about death at all costs. In an effort to change that attitude, What We Don't Talk About, a new exhibit at 937 Gallery on display through Sun., Sept. 1, explores the way people process death and mortality of themselves and their loved ones.

The exhibit, guest-curated by artist Becky Slemmons, features sculpture, sound, photography, tapestry, and film from nine artists. Slemmons originally got the idea for the project from her friend Annuska Dal Maso, whose photo series “Where does sorrow live” is featured in the show and based on a box of letters about death.

Slemmons went forward with the exhibit even though she was initially wary about the topic. “The fact that death and mortality, and speaking about death and mortality could, or even should be something that universally unites humanity — and yet it produces profound discomfort — fascinates me,” says Slemmons.

While art relating to death often features dark colors — black, gray, red, more black — and imagery, the works in What We Don't Talk About are lighter. Not lighter in the sense of shying away from the depth of the topic, but lighter in color and feel. It doesn't feel like walking into a moody, gloomy exhibit, but instead one that thinks about how death can be beautiful, funny, and painful all at the same time.

“I did not want every piece to be about the experience of losing a loved one to death, but to include different perspectives on the subject of death and mortality from different approaches,” says Slemmons. “I am interested in this, that perhaps there is a beauty in the fact that we, as humans, have the ability to feel such a full range of emotions, from elation to the deepest sorrow, relating to death and beyond.”

In her textile work, Mary M. Mazziotti toys with "memento mori," a Latin phrase ("remember you will die") that was popular in 17th-century European art. Mazziotti created a series of textiles with wry phrases meditating on death's constant inconvenience. She has a series of banners. One reads "Oh Death! It's always all about you, isn't it?" in cursive, and others have a sinister rebus (a visual puzzle combining pictures and letters.)

Kevin Clancy also employs morbid humor in his installation “DEAD,” a sculptural work featuring a metal grid affixed with skeletal hands, sometimes hanging on their own, sometimes sitting atop an iPad, all framed by glowing neon lights. 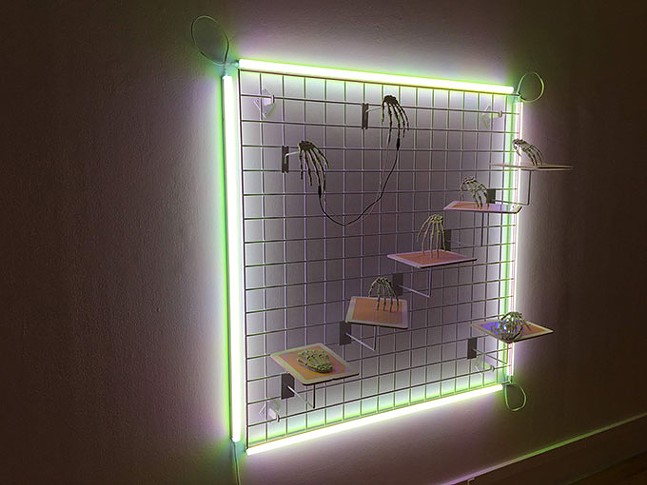 Other works in the show get more intimate, tackling the more personal and specific reactions to death. Alisha B. Wormsley encases personal objects in resin — a funeral procession flag, hair with beads — and combines them with her phrase "there are Black people in the future." The work is coupled with audio by sound artist Ricardo Iamuuri Robinson.

Yvonne McBride created a version of an ancestral altar, featuring a jar surrounded by three candles where visitors can add the names of family or ancestors who have passed. A sculpture in the middle of the room by Lenore Thomas represents objects her mother held while dying.

Several pieces are white or light-colored. Adam Milner’s “Some Body” features a white table with bones, teeth, and other light-colored body parts (both real and sculpture). Natalie Settles’ graphite drawings feature a large expanse of white with finely detailed images, using the white space to capture that “death is about what is missing,” as her statement reads.

“Black certainly is the color of mourning in our culture,” says Slemmons. “To me, black in reference to death also signifies the dark weight of fear of the unknown, the end, and all the emotions that go with that.”

Search 60,000 images by Charles “Teenie” Harris at In Sharp Focus, a new permanent gallery and interactive installation at Carnegie Museum of Art