A whirlwind romance is interrupted by the war on terror

During spring break in 2001, a pretty college student from South Carolina named Savannah (Amanda Seyfried) meets John (Channing Tatum), a solider on a two-week leave. After a chaste courtship, the two become avid pen-pals, planning to scribble away the year until John's tour is up. But after Sept. 11, John re-ups -- what American hero wouldn't? – and the couple's plans get ... well ... complicated. Lasse Hallström's romance, adapted from Nicholas Sparks' best-seller, plays like an update of the glossy Hollywood-studio melodrama, those so-called "women's pictures." And, despite the fusty antecedent, that's what saves this film: It has the pleasant air of unreality that firmly marks it as "for entertainment purposes only" and thus saves viewers from fussing about the plot contrivances, the marked lack of secondary characters, the greeting-card dialogue, the endlessly perfect locations and so on. The two leads are appropriately dreamy -- I was transfixed by Seyfried's luscious tumble of blonde hair -- and there's good supporting work by the always reliable Richard Jenkins as John's troubled dad. Starts Fri., Feb. 5. 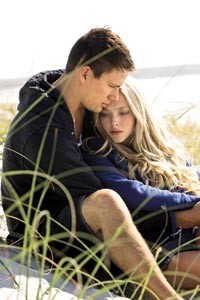