Dean Cercone and Ivory Weeds look in from the outside

They jokingly call the sound they co-created "Renfrew folk," after the small community where they grew up 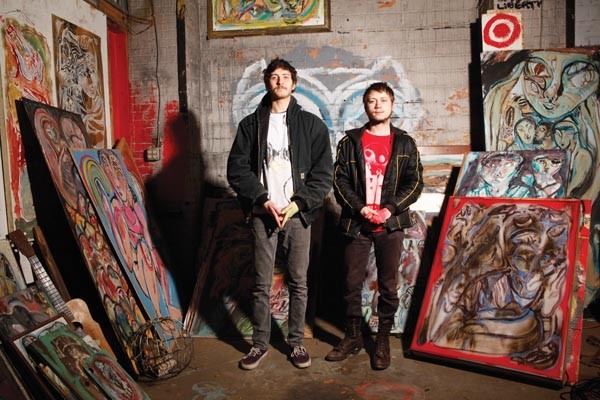 with RIVKA, THE BEAGLE BROTHERS.

Two summers ago, Dean Cercone did something that would have been unimaginable 10 years earlier. He stood onstage with the man known as Jandek.

An enigma, if not a legend, Jandek has self-released more than 60 albums of scratchy, atonal, emotionally desolate folk rock, at a pace of about two a year since 1978, from a mail-order catalogue attached to a Houston P.O. box. For 25 years, he never played a show, gave a proper interview or let loose any biographical information. In a field fueled by publicity, Jandek shot to moderate success on a void of it. But in 2004, he began touring, providing no more of an explanation on his change of heart than he's provided for anything else.

Local poet and independent publisher Che Elias lured Jandek to Pittsburgh in August 2010. Hundreds of people had looked on with curiosity as the black-clad, rail-thin performer hid beneath a fedora and slowly strummed out his ghostly songs. For the show, held on the patio of the Pittsburgh Center for the Arts, Elias had to assemble a backing band from the pool of local talent; he recruited Cercone on guitar. Though he was 12 years shy of being born when Jandek pushed out his first LP, Cercone's music had a similar low-fi, free-flowing, slow-paced vibe, and he too is a prolific self-releaser.

"[Jandek] told us, ‘I'm thinking it should be sparse and I want the songs to last longer than they should,'" recalls Cercone. "People got up and left. Some of them came in and out."

The "outsider musician" label, which refers to artists who eschew traditional influences, song structures, genre conformity, recording techniques, promotion and/or distribution for a squarely individualized approach, was created for the likes of Jandek and Daniel Johnston. It's also useful in describing Cercone, 20, and John Chriest, 21. The long-time friends and soon-to-be tour-mates escaped the backwoods of Butler County together, where they had baffled peers and teachers, for the ends of Pittsburgh that are plentiful in cheap rent, makeshift art studios and house shows. Young and considering no more traditional career prospects or ambitions, it's here that each makes his artistic stand, with outputs of unpolished, idiosyncratic ambient folk recorded mostly on home computers.

Chriest has put out one EP and two full-length albums (with another upcoming) under the moniker Ivory Weeds. His sound is like that of a young Wayne Coyne, of The Flaming Lips, fronting a drummer-less Sigur Ros, if the Icelandic avant-rock band had been put on its most mellow mode by sucking down cough syrup. Working mostly alone, Chriest piles on loops of reverb-heavy guitar parts, creating sonic atmospheres as warm, cavernous and fleeting as Panther Hollow on a temperate fall day.

"There is a free association to it," says Chriest. "I won't realize how the parts correlate until they do. It's like a subconscious coming through." He adds, "Art and music is about self-expression above all else. It's not about being good or bad."

The entire Ivory Weeds category is available for free download, though Chriest sells CD-Rs at shows; his debut, Dreams ... It Seems, is in sleeves made out of old denim he stitched together. Like those of Jandek, his songs retain a certain distance from the listener; Chriest doesn't sing clearly or engage in any variant of the expected chorus-verse-chorus format, and the lyrics are, of course, opaque. Playing live, he hunches over his guitar, casts his eyes down and murmurs into the microphone. It's as if he is focused more on the music itself than the listener — in a good way.

Cercone's stuff, which he mostly dumps onto the Internet without parsing it into albums or EPs, is spacier and heavier on percussion. The tracks on his Soundcloud page recall the loosest of the psychedelic noise-rock bands of the '60s (the kind that existed before punk convinced all of the less-conventionally studied musicians they needed to be concise). Cercone is also a visual artist, with space at a repurposed storehouse in Garfield called the Warehouse, where he swirls black ink into the pattern of crude figures for paintings and T-shirts.

Cercone and Chriest jokingly call the sound they co-created "Renfrew folk," after the community (population 4,000) where they grew up. The two met on a school bus as freshmen at Seneca Valley High School.

"They used to call it ‘Heroin High,'" recalls Cercone. "You'd walk the halls and see 15-year-olds just spaced out, the rich ones on Oxycontin and the poor ones on street drugs."

Cercone had his own experiences getting buzzed as a youth. "I wasn't very stable," he says. "I was emotionally energetic and they started drug-testing me. I failed for marijuana. I didn't think they could punish me for what I did outside of school. I was wrong."

In ninth grade, he was transferred to Longmore Academy, an institution in Mars that "provides alternative education for at-risk youth," according to its website — all over his marijuana use.

"There were some really wild individuals there," he recalls, "and they let me teach an art class and do an independent study."

In the meantime, he was befriending older artists and musicians and playing in a "screamy" emo band. Cercone used file-sharing to expand his influences into obscure territories: He downloaded calypso jazz, Indonesian folk, old-time gospel. "Some friends and I were competing for the wildest MP3s we could find."

Meanwhile, Chriest, who continued at Seneca Valley, was having the opposite formative experience: He started playing guitar but had almost had no influences. "It was just my mom, me and two younger siblings," he says. "We couldn't afford cable or many records," save for the Prince and Paul Simon albums his mother put on while cleaning. "Those are about as close to influences as I had."

But what he did have was a shed. Chriest and Cercone jammed out there for hours and it became a neighborhood hangout. "It allowed us to force suburban kids into our small culture," recalls Chriest.

After graduating from Longmore, Cercone relocated to Pittsburgh to pursue art and music. Chriest went to Butler County Community College to study psychology for a year-and-a-half but dropped out, partially because of lack of faith in the standard concept of mental illness. After that, he followed Cercone to Pittsburgh. (It should be noted that neither are "outsider musicians" socially, both praising the interconnectivity of the local scene.)

The two are set for a small tour next month, going from Baltimore to Philadelphia to New York City. But first they are playing a benefit for anti-bullying arts-education nonprofit You=Love, at the Thunderbird Café on Feb. 18. Cercone illustrated a children's book for the group and says its message of self-acceptance is one his music embraces.

"You can't do this without loving yourself and caring for yourself," says Cercone. "You can't dedicate yourself this much to your art without thinking you can work it out."

Cercone is a full-time artist and Chriest gets by with a cluster of odd jobs (saving up some of his earnings for a tour of Europe). Despite the anxious parents, low running balances on their checking accounts and houses full of roommates, the two say they don't want any other lifestyle.

"I would rather be poor, happy and doing what I love than comfortable and bored," says Chriest. "With this, I'm engaged. I'm always in a state of trying."

And if he ever does tire of it, there are other things an intent, mindful young man can do with this life. "I've always thought if it didn't work out, I would like to live in a Buddhist monastery for a year," Chriest says.