The laughs started early at the Deadpool screening, with opening credits that promised: “some hot chick,” “a British villain,” “a CGI character” and “a gratuitous cameo.” And truly, Tim Miller’s adaptation of the Marvel comic did deliver all that and more. 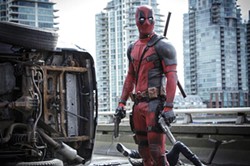 Deadpool offers a minimal story: Seeking a medical cure, a guy named Wade (Ryan Reynolds) gets deformed and super-strong, becomes “Deadpool,” and then tracks down the guy (Ed Skrein) who messed him up. But it’s told in a series of flashbacks, explanatory rambles, breaks for quipping and frequent bursts through the fourth wall. Wade/Deadpool addresses the audience directly, commenting on what we’re watching, the Marvel Cinematic Universe and The X-Men movies, explicitly. (Even a superhero from differently branded universe gets a nod.)

Understandably, the more a viewer knows about the MCU and superhero tropes, the better the inside jokes will play. But I’m an infrequent visitor to the MCU and still found plenty that was amusing. Superhero films have become so bloated lately with their own sense of self-importance that this skewering, however silly and vulgar, is welcome. Reynolds redeems his Green Lantern debacle (he still looks good in the colorful spandex), and Silicon Valley’s T.J. Miller steals every scene as Deadpool’s deadpan friend. (And, wait — Leslie Uggams is in this?!) The film is definitely R-rated for violence, nudity and language. If you bring the kids, be ready to explain the jokes about pegging, teabagging and Are You There, God? It’s Me, Margaret.