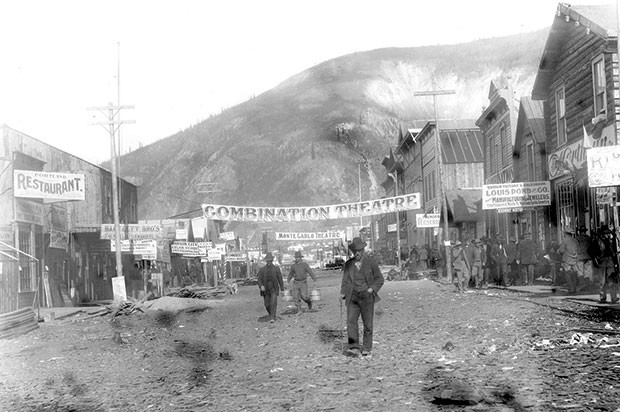 Dawson City: Frozen Time may be one of the more remarkable and transfixing films I’ve seen in a while. Bill Morrison’s documentary is ostensibly about the discovery of some long-lost silent films. But it is easily a dozen films in one, effortlessly shifting between history lessons about early film, labor and gold-mining; experiential art film; and meditations on time, progress, decay and rebirth. It’s also about a long-forgotten, faraway time and town that nonetheless has links to well-known things as disparate as Hollywood’s Grauman’s Chinese Theater, the 1919 White Sox baseball scandal, Ken Burn’s filmmaking style, and Donald Trump.

It all starts in a First Nations fishing encampment at the confluence of the Yukon and Klondike rivers, just 173 miles south of the Arctic Circle. Then came the Gold Rush of 1896, and the new boomtown of Dawson City filled up with hopeful miners. After the boom, the town shrunk considerably but remained viable enough to support three establishments that screened the latest entertainment — moving pictures. In time, the Guggenheims consolidated the mines, a Carnegie Library opened, and families took to normal life in the far north. Few knew of tiny Dawson City.

Until 1978, when a routine demolition of Dawson’s former athletic hall uncovered 533 reels of highly combustible silver-nitrate films, buried in the permafrost. Shipped to archives in Ottawa, the “Dawson Find” turned out to be an astounding cache of studio films and newsreels, most from the 1910s, that had escaped the fate of similar works, i.e. destruction, from being tossed in the river or incinerated. Even more remarkably, after restoration, the films were watchable, though some bore scars of environmental damage, such as water marks.

In his film, director Morrison retells the story of the town, its boom and bust, and the curious journey of these films. (The random circumstances that led to these films being preserved is a great story I’ll leave viewers to discover.) He uses archival photography (including gorgeous photographs taken of the Yukon Gold Rush by Eric Hegg) and footage. But in a move that serves both the historical narrative and the exposition of these extremely rare films, Morrison stitches together the tale of Dawson City using excerpts from 124 of the once-buried films. Some are newsreels, filling in world events, while others are comedies, historical dramas and melodramas, standing in. (For instance, in establishing Dawson’s lively gambling scene, Morrison compiles a reel of gambling scenes.) Thus, films such as The Girl of the Northern Woods (1910) and If My Country Should Call (1916) transcend their original function as entertainment, both to illustrate actual history and to stand as a reflection on fragile “permanence.”  Boom towns, film stock, people and even history itself are there, and then gone — until an overturned shovel of dirt brings it all back into light.