"I can't wait to see people who have never heard him, when they see him play for the first time." 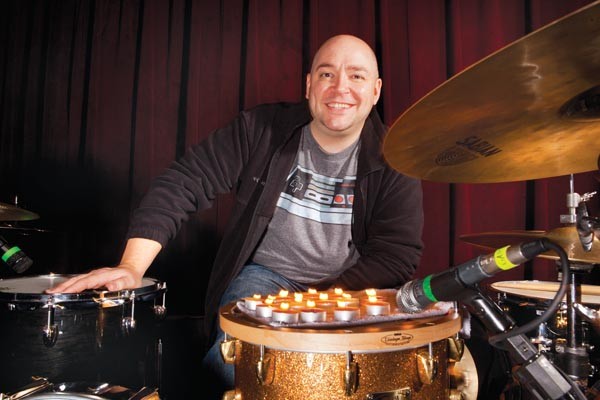 Photo by Heather Mull
On fire: David Throckmorton prepares to celebrate the big 4-0.

There's a quiet fame in being a skilled drummer. David Throckmorton's name wouldn't be the first that comes to a civilian's mind when Pittsburgh music comes up, but musicians who have been around for a while know it quite well. Though, when they refer to him, they usually just call him "Throck."

"I love Throck!" says Bill Deasy, the onetime Gathering Field frontman who now performs solo, with Throckmorton in his backing band. "He's kind of a little more like a force of nature than any other drummer in Pittsburgh. I love all the drummers I've worked with, but he's sort of on a different level."

"He never ceases to amaze me," says Paul Thompson, a local jazz bassist who's been playing with Throckmorton since the '90s. "I can't wait to see people who have never heard him, when they see him play for the first time."

David Throckmorton was born in Washington, Pa.; his father, Bob, was a jazz drummer for much of his life, playing regularly at the Holiday House in Monroeville, and touring for a time with lounge-style vocalist Buddy Greco. His brother, Rob, played drums too, taking his talents to the Army before being deployed as a soldier during the first Gulf War.

Throckmorton went to college "for a minute," he says, before dropping out. "It wasn't for me. I knew I wanted to be drumming, so with that, it didn't make sense." He spent some time back in Washington, then in Pittsburgh, gigging and playing with bands like Sleeping Giants. In 1997, he got his first big break with the help of Paul Thompson, a Duquesne student who knew him from playing around town.

Thompson was referred through a connection in Youngstown to the touring band for jazz trumpeter Maynard Ferguson. He took the opportunity — and found that the drummer for the band wasn't exactly ideal.

"He wasn't working out," recalls Thompson. "Nobody else in the band really got along with him. And he was my roommate. So at the end of that tour, I told the tour manager, ‘I know this drummer back in Pittsburgh.' I said, ‘Throck is the greatest drummer you will ever hear!'"

Throckmorton was picked up for the band and did two years on tour — about nine months out of the year. It was an eye-opener.

"I'd been out of town a little with bands before that, but I hadn't been west of Indiana or something like that," Throckmorton says. "The first gig with Maynard was in Vegas — that was my first plane ride. Suddenly it was like, big shot from Washington, Pa."

After two years with Ferguson's band, Throckmorton returned to Pittsburgh, setting up with bands here, marrying and becoming a father to two boys. (He's currently going through a divorce.) In the late '90s, his main vehicle was the mostly-improv fusion band Electric Eel Service; in the 2000s, he focused on Beam, an improv live-band hip-hop hybrid with two bassists (including Paul Thompson), an MC and a DJ. His work with Beam is spastic, like the breakbeat stuff often created using sequencers in dance music. It shows that the jazz drummer is no purist.

"I like programmed drums," Throckmorton says. "I grew up listening to Run DMC and everything after, and I like that culture. If it's done creatively, I really like it. Guys like DJ Premier and Pete Rock and DJ Shadow and J Dilla — these guys are as influential to me, as drummers, as some drummers are. It's like — machines imitating guys, and now you're imitating the machines."

In 2003, Throckmorton started playing with Bill Deasy. Deasy remembers talking to Throckmorton on the phone about a gig coming up days later at a fair in Greensburg; by the time of the gig, Throckmorton was ready to go. Playing backup to a singer-songwriter is different from a lot of what Throckmorton is used to in jazz bands with drum solos and polyrhythms.

"With someone like Deasy, who strums an acoustic guitar and sings, it's not difficult music," Throckmorton says. "But it's a challenge to try to put your mark on it without being like, ‘Hey, look at me.' They're his songs." Throckmorton plays with other pop and rock acts, too: He's played with Good Brother Earl since the mid-'00s, and backs up singer-songwriter Maddie Georgi at times.

"He's a very musical drummer. He's the kind of musician who makes everyone around him, including me, better," says Deasy. "He can be very blunt, but I've grown to appreciate that, because he's also always the one who wants to run a song again, to make sure everyone's got it. He's kind of become a bandleader; he keeps everything together."

"If you can hook up with good players," he says, "I think the best thing is to try to find a way for them to feel like they're part of it, and they're expressive within it, and you're going to get the best results that way. I've heard a million great band leaders that I like talk about that. And I want that freedom when I play with someone else, too."

On Sat., Jan. 26, Throckmorton celebrates his 40th birthday with a show featuring many of his bands, at Club Café.

"As I get older," he says, "I have less desire to be the hot drummer than when I was a kid. But that never goes away ... it's more like, I want to sound interesting playing this. And if it's a hired-gun gig, you have to please the person who hired you. Sometimes you have to behave and turn it off. But your choices and your musicality is still gonna come through, and generally, people like that.

"I like to hear that in drummers' playing: that they're going for it," he adds. "It's hard to describe, because it might not even be risky. I'm not afraid I'm gonna mess up the song or overplay, but ... I dunno. Safe is boring."