Dating in virtual reality is here, and it could enrich the online-dating scene. | Love and Sex | Pittsburgh | Pittsburgh City Paper

“VR is such a powerful way to feel present with the people you care about when you can’t physically be together.” 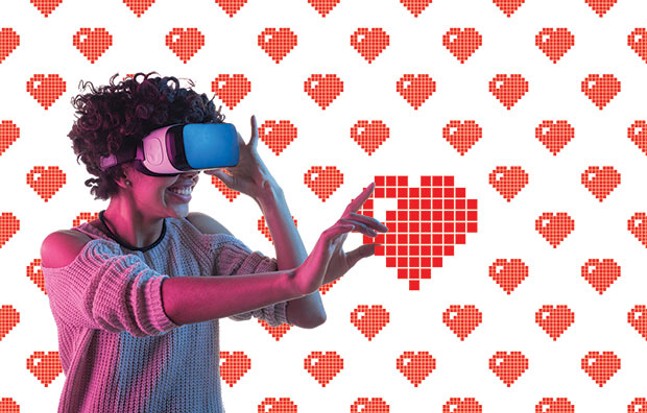 Dating can be hard. Who hasn’t overheard people at a bar complain to their friends that “there are no good men in this city.” Or heard others at work tell their coworkers, “I just can’t find the right woman.”

No matter if people live in giant cities with millions of people, or in small, rural towns with only a few hundred, finding someone to really connect with can be a struggle. Technology has intervened to help, and over the last two decades, the internet has provided some possible solutions. According to the Statistic Brain Research Institute, by May 2017, more than 49 million single Americans had tried online dating.

And now, online dating is becoming even more advanced with virtual reality. Starting in 2015, tech companies began selling headsets that allow users to enter into virtual worlds by pairing these devices with their smartphones. Users could watch immersive videos and play interactive games; the technology has even been used to help Americans understand what it’s like to live in third-world countries and war-torn areas.

Companies like Oculus, a subsidiary of Facebook that has a research office in Pittsburgh, and VRchat offer virtual-reality applications that allow users to interact purely as a social experience. Users don’t need to play a game or score points; they can just chat and socialize.

“VR is such a powerful way to feel present with the people you care about when you can’t physically be together,” wrote Rachel Rubin Franklin, the head of Social VR at Facebook, in a December 2017 Facebook post.

And some users are using virtual reality to do more than just hang out; they’re going on dates. In December 2017, Monica Chin, a writer for tech news site Mashable, wrote that she saw benefits of using Facebook Spaces to go on dates with her long-distance boyfriend. “But social VR isn’t a disconnect,” wrote Chin. “It’s a new, heightened connection. It’s a connection not tethered by proximity, one we can define and shape into whatever we want it to be.”

But others worry that for blind dates, virtual reality will just lead to people checking out earlier than if they were on an in-person date. “People might use VR dating to seek out what they think is the perfect partner, and be unwilling to push through to the end of a date with someone who isn’t,” said UCLA social psychology professor Benjamin Karney in a February 2017 article on the tech news site CNET.

Either way, virtual-reality technology doesn’t appear to be going away anytime soon. Online dating website eHarmony said in a 2015 report that virtual-reality dating will a big part of the dating scene by 2040. Whether people are ready or not, it seems like dating in virtual spaces will become a new normal.