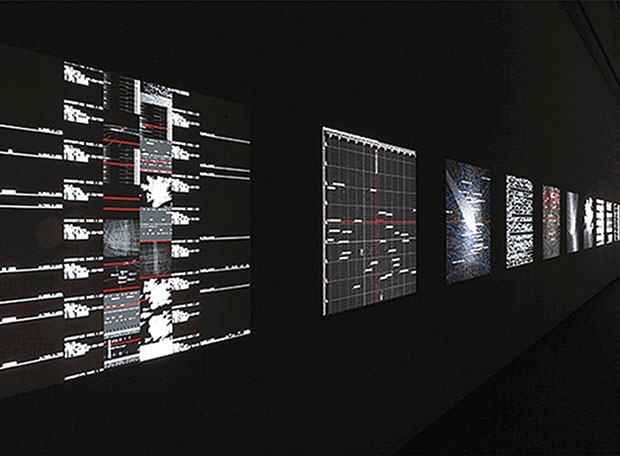 A series of 10 projections, evenly spaced and sized, generates layer upon layer of information — grids, graphs, routes and charts, predominantly in flat black and white, infrequently relieved with a slash of red or burst of blue. Most of what we’re looking at, head on a swivel, eyes darting from one screen to the next, appears to be code, ripe with data that we’re unable to decipher. As the images pulse and bolt, they also whir, hum and click. The ambient electronic score counters their racing motion with a soundtrack rhythmic and pulsating, softening the edge of the breakneck motion in gentle, rolling waves and the murmuring sway of a heartbeat or the rush of blood, bringing an element of the organic to something otherwise fully technological.

Eventually, words appear on one of the frenetically scrolling squares. These are discernible only if one nears the segment to almost arm’s length, traveling too deep into the heart of the beast to register its scope; the intimacy necessary for comprehension mandates isolation, and proximity paradoxically results in distance, as we can’t acquire acquaintance with the devil in the details without losing sight of the bigger picture. But once up close, we can clarify the text as the names of stars. Then, taking a few steps back, we can appraise the outpouring with the knowledge, at least, that a universe is being mapped.

This is from the snippet that we can comprehend thanks to the bit of kindness offered by words in a language we speak. But ultimately, we’re left to realize that this small mercy was exactly that: a miniscule fraction. So much more comes out, chattering and babbling at a rate with which we could not keep pace even if we could comprehend.

Conspiracy theorists, those who watch too many dystopian science-fiction movies, and people who are high (this writer pleads the fifth as to which corner of that triangle she occupies) might be forgiven for imagining that they are receptive but receiving something that they themselves cannot identify.